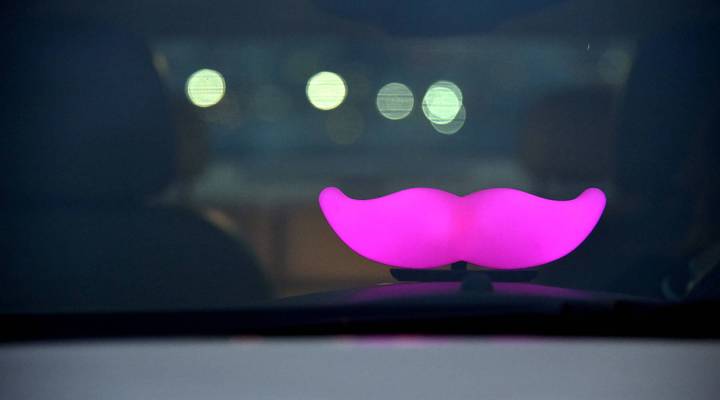 COPY
The Lyft mustache is used to identify the ride-hailing app's drivers. The company, along with rival Uber, said it is leaving Austin after failing to overturn the city's safety measure.  Photo by Mike Coppola/Getty Images for Lyft

The Lyft mustache is used to identify the ride-hailing app's drivers. The company, along with rival Uber, said it is leaving Austin after failing to overturn the city's safety measure.  Photo by Mike Coppola/Getty Images for Lyft
Listen Now

When Uber and Lyft decided in May to shut down their operations in Austin, Texas, their exit left a vacuum.

The ride-hailing companies had campaigned against the city’s legislation requiring drivers to be fingerprinted – rules the companies said did not work for their business models.

When residents upheld the regulations in a public vote, the companies announced their departure two days later.

In the weeks since, a slew of other ride-hailing companies have rushed in to take their place. Ten companies, to be exact, all of whom seem to have no issue with fingerprinting. It makes for a crowded market.

I experienced that recently. As I stood outside a YMCA in the city, I pulled up the many new ride-hailing apps I had on my phone: Fare, Fasten, Wingz, Ride Austin, InstaRyde and ScoopMe. I decided to try Fasten. After ten minutes of waiting in the hot Texas sun, my air-conditioned savior in a Prius pulled up.

Robert Gonzales, who told me he goes by Bobby, was friendly, but not exactly a talker. I prodded him with questions: Did he drive full-time? No, he’s got a full-time job as a semiconductor technician. But about a year ago, he started driving part-time for Uber and Lyft. So where does that extra money go?

“I have three college kids, so that’s pretty much where my ridesharing money goes to,” Gonzales said.

When Uber and Lyft left town, Gonzales wasn’t too worried, as driving wasn’t his main source of income.

“But I do worry about most of the drivers that I know that are relying on this full-time,” he added.

For those drivers, it was touch and go for a few weeks. But then the newcomers rolled into town. Like Michael Leto, the CEO of Fare.

Leto’s a risk-taker. Even though his company had only been operating in Phoenix for nine weeks, he was carefully eyeing the vote in Austin. Polls closed on a Saturday night, and by Sunday morning it was clear that voters had upheld the fingerprint regulation. Leto went to bed that night, unsure what Uber and Lyft would decide to do.

Leto set up a temporary office at a hotel, and the next day was at city hall signing up for a license. The following week Fare was cleared to operate – and within two weeks, almost 2,000 drivers had signed up.

“There wasn’t going to be an opportunity like this in the country and we just jumped on it as fast as we could,” Leto said.

What had happened in the Austin market was unusual. Companies had created demand both among customers and drivers and then, suddenly left. Leto says Fare now has 6,000 drivers. That’s compared to Uber’s estimated 10,000 drivers.

But while Leto with Fare was the first, many others have pulled up behind him. Like Vlad Christoff, co-founder and COO of Fasten.

Two months ago, Fasten was only operating in Boston. But then, as Christoff puts it, “Austin happened.”

“The plan was to move to other markets quickly,” he said. “And Austin was on the list, but it wasn’t second. What happened here, however, changed things, and Austin became the second market.”

Christoff won’t reveal how many drivers have signed up with Fasten, but contends the company’s doing well here. At least eight other companies have swooped in, becoming part of what feels like a ride-hail gold rush. The city’s been plastered with fliers. Competing logos crowd driver windshields – in one case, three of them. But Christoff isn’t fazed by the competition.

“We believe this is not a winner-take-all type of market,” he said. “We believe in competition, it keeps everybody honest. We compete for both drivers and riders, at the same time, like everybody else. So, we encourage competition. The more the merrier, actually.”

But Leto with Fare rejects that idea. He’s come here to dominate the market.

No doubt some will fail. But in the meantime, these ride-hailing companies will continue to duke it out. Eventually it’ll be up to the customers to decide who makes it big in Texas.