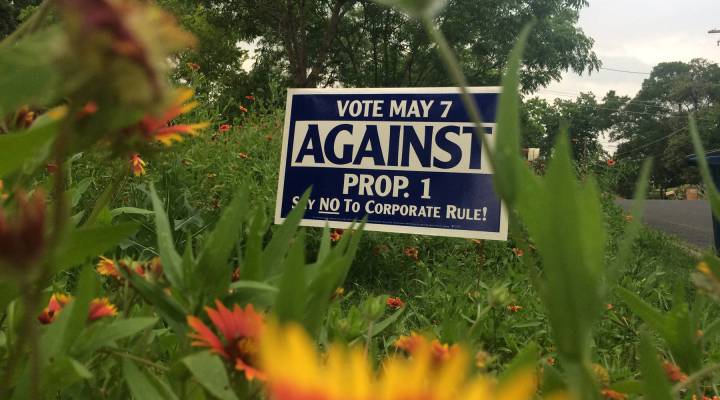 COPY
"For"' and "Against" Proposition 1 signs adorn Austin lawns. The issue will be decided on May 7. Audrey McGlinchy/Marketplace

"For"' and "Against" Proposition 1 signs adorn Austin lawns. The issue will be decided on May 7. Audrey McGlinchy/Marketplace
Listen Now

Ride-hailing companies Uber and Lyft have battled local regulations in many cities, including San Antonio, New York City and Atlanta.

It’s now Austin’s turn. On Saturday, voters in the central Texas city will choose which rules they’d like the companies to work under. If the vote does not go in their favor, Uber and Lyft have threatened to leave the city.

The story of how Austin got to this vote begins in a park in January. Lyft drivers Monique Mitchell and Mo Ratel are spending an afternoon in Austin’s Zilker Park. They’re armed with clipboards and pens. A few dogs feign interest in their pitch. But Mitchell and Ratel are here for the humans. Mitchell approaches two women.

“We have a petition here basically to bring it to a public vote for ridesharing companies like Uber and Lyft to stay in Austin,” she said. “I was wondering if we could get your support with a signature?”

But before signing, the women have a few questions. They bring up the subject everyone’s talking about: background checks. Lyft driver Ratel explains that Uber and Lyft run background checks through third parties using a name and Social Security number. But a month before this day in the park, Austin council members voted to mandate a different kind of background check for these drivers: fingerprint-based background checks.

In January, an Uber and Lyft-funded political action committee submitted more than 20,000 petition signatures to the Austin city clerk. The PAC says it gathered 65,103 signatures, but only 20,000 were needed to force a public vote.

At a council meeting in December, Councilwoman Ann Kitchen made her defense.

“I’d just like to point out that the FBI and the Texas Department of Public Safety agree that fingerprinting is the best way to ensure that the records reviewed belong to the person being checked,” she said.

The city requires them for taxicab drivers. And council members say it’s the only way to ensure drivers are who they say they are. But Uber and Lyft say why fix what’s not broken? Their background checks work well.

Plus, the companies argue fingerprinting cripples their model of onboarding drivers quickly for what many drivers is a part-time gig, says Uber representative Adam Blinick.

“Fifty percent of our drivers are on the platform for less than 10 hours a week,” he told council members in October. “So the more steps and the more costs and the more hoops you make someone jump through, the less chance they are going to take advantage of this economic opportunity and even test it.”

But a majority of council members, like Councilwoman Delia Garza, believe fingerprinting is the only foolproof way to confirm someone’s identity.

In December, the council voted in favor of fingerprinting. Weeks later, Uber and Lyft responded. Members of a political action committee funded by the companies showed up at city hall, rolling boxes of petition forms behind them.

Signature collectors, like Lyft drivers Mitchell and Ratel in Austin’s Zilker Park, had collected more than 20,000 signatures, roughly the number needed to force a public vote.

The rules Uber and Lyft favor are almost identical to what the companies have been living under in Austin so far: looser regulations that do not require fingerprints. On May 7, Austin residents will vote on what’s now known as Proposition 1. A vote “for” allows Uber and Lyft to keep doing their background checks, while a vote “against” ushers in a city-run fingerprinting process.

In the meantime, mailboxes, radios and TVs have been humming with campaign noise – most of it from one side. One Uber- and Lyft-funded commercial said: “We can all agree, ridesharing drivers should have national criminal background checks. But on May 7, we’ll be deciding who should conduct them.”

The ride-hailing companies have funneled nearly $10 million into this campaign — because if they lose, they say they’ll be forced to leave.