Maybe you know somebody – or you are somebody – who has cut gluten from their diet. According to the NPD group, about 30 percent of Americans are trying to reduce their exposure to gluten, though only a small percentage of those truly can’t digest the stuff.

But these days, gluten-free foods aren’t your only option. Recently a tech startup raised more than $9 million to fund its portable allergen sensor.

Shireen Yates is CEO of that startup, Nima. She was fed up with being at an event or dinner, not knowing whether the food in front of her was genuinely gluten-free. She has the kind of intolerance where you really don’t want to find out after you eat.

Nima’s portable device lets diners test their food at the table. Which she does all the time.

“For the most part, wait staff in restaurants have been very, very accommodating,” she said. “If it comes up positive for gluten for something everyone thought was gluten-free, I’ve usually had my meals comped or taken away and asked if there’s anything else I feel comfortable eating on the menu.”

Mark Sorrells, a grain expert at Cornell University, said the problem is, “Some people think they’re sensitive to gluten when in fact it’s other ingredients in foods that can cause problems.”

And the device won’t help them. But he said the truly afflicted could benefit when Nima starts shipping this fall, even with a $200 price tag. 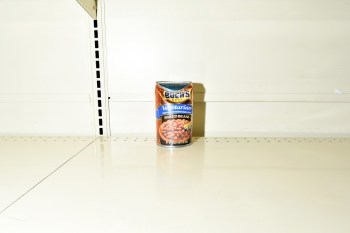 Shopping in a pandemic: “Everything is gone but gluten-free pasta.”