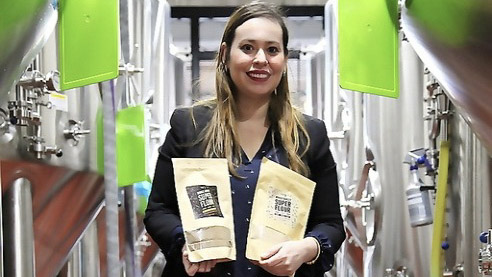 Bertha Jimenez didn’t plan to create a company that would help reduce food waste; as a trained mechanical engineer, she was more interested in looking at how our cities are built. All of that changed when, while she was studying for her Ph.D. in technology management at New York University, she entered a competition called Global Idea Exchange. Participants in the competition had to explore ways to improve cities. Jimenez and a friend decided to address this by using a process called industrial symbiosis. That’s when waste from one company is used as raw material for another company’s product.

Jimenez and her colleagues noticed the increasing number of microbreweries popping up in New York City. They also realized these companies were paying hundreds of dollars to discard brewer’s spent grain, a byproduct of the beer-making process. Every year, 42 million tons of the stuff, which is high in nutritional value, is thrown away globally.

Jimenez spoke with me for the Marketplace series “Changemakers.” She shared how — and why — her company Rise Products is helping reduce food waste and reveals who some of her big business partners are. Below is an edited transcript of Jimenez’s comments.

The purpose of Rise

The aim of the company is to reduce food waste. We take organic byproducts from industries and convert it into ingredients. Right now we’re working with the beer industry, in which we take the main byproduct that’s called spent grain. This is just malted barley, and we have a process in which we make it into flour that’s high protein, high fiber and low in carbohydrates. In cities, 85% of the time we send it to a landfill.

In New York City, we have worked with over 20 breweries, and we’re also working with breweries in upstate New York, and our biggest client is Anheuser-Busch (which makes Budweiser and Stella Artois). You can scale way faster with them than with small breweries.

On changing the food waste industry

What makes me a changemaker is the way I see the world, the way that I think everything has a value. Just because somebody labeled something as waste, that doesn’t mean that’s what it should be.

Because of my background — I’m from Ecuador — we always use every single part of every single thing to make something. It was really shocking to me, like, how much food waste we have laying around. It’s millions of tons per year. If you just take that and feed it to people, there shouldn’t be food insecurity in this country or in any country.

Let’s say we take the spent grain from the northeast side of the United States. That can feed something like 15 million people in a year. That’s a lot.

We also converted [the spent grain] into paper, into additives. We reached out to chefs and bakers. The first one didn’t like it at all, so he threw us out of his place. But we stumbled into a guy who has been trying to work with spent grain himself because he’s two blocks away from a brewery. We gave him some flour and we also gave him some cookies, which I made, and I said, “Hey, we made this. What do you think?” And he replied, “Well, yeah, this is nice!”

Not quite gluten free

Barley has gluten, it has way less gluten than wheat flour … but it’s low in gluten. In a year, we have done 25,000 pounds of spent grain. Even though it sounds a lot, there’s still way more to do.