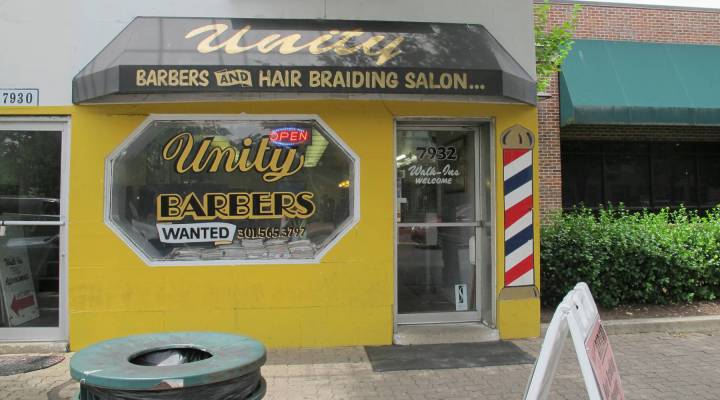 According to our latest Marketplace-Edison Research Economic Poll, the economy can look a bit different if you live in an urban versus suburban or rural area. And people living in the suburbs are feeling less stable, despite measurable improvements in the overall economy.

Ali Salam is the owner of Unity Barber Shop in Silver Spring, Maryland. It’s a suburb of Washington, D.C., but still feels pretty urban, and many of his customers trek from the outer suburbs.

“I can see that the economy is getting better,” Salam said. “I see how people’s pockets fluctuate. I see hundreds of people in here each week.”

“When they’re looking for jobs, they have to get a haircut,” says Ali Salam of Unity Barbers.

And those hundreds of people help him keep tabs on how the economy is doing in the area based on how often people come in for haircuts.

“When they’re looking for jobs, they have to get a haircut,” he said, and the same for when they are interviewing or just maintaining employment. “All three stages of someone’s economic struggle or interaction is involved with grooming in some sort of way. Anybody that’s worth their salt.” And based on that metric, he thinks things are better.

But Reggie Mack, who lives further out in Columbia, Maryland, said things are getting more difficult for some. Mack said he makes an “above average” salary as a car salesman, but he’s not living as well as he used to.

“When you start noticing the simple things are harder to pay for — cable, the haircuts, things that you took for granted, you just did without thinking, it’s just not that way anymore,” he said.

More than half of the suburban residents we surveyed said good jobs were difficult to find near home, and people in the suburbs were less likely than their urban counterparts to feel they’d find a good job within six months if they lost theirs.

That matches up with the research of Elizabeth Kneebone, a fellow at the Brookings Institution’s Metropolitan Policy Program. She studies the economy of the suburbs and said even if things are improving overall, some aspects of the changing economy make it harder to move up the economic ladder.

“There are more lower-wage jobs and lower-wage jobs are becoming a larger share of the economy,” she said, so “that even if you’re working full time, it may not be enough to get your family above the poverty line.”

And even those who are holding on, like Reggie Mack in the busy Silver Spring barbershop, can have a precarious grip on the middle-class lifestyle. He said earlier this year, he had to go on disability after a surgery and almost lost his apartment.

“In those two months, I was in the eviction hearings twice,” he said.

Barber Ali Salam and customer Reggie Mack agree the economy is improving, but have seen different levels of recovery in urban areas versus the suburbs.

According to Kneebone at Brookings, there are now more people in poverty in the suburbs than in the big cities that anchor them. One of the reasons, she said, is that the poor are being priced out of urban areas and are moving farther out.

“But I think the much larger piece is this downward mobility,” Kneebone said. “You know, longer-term residents who have slipped down the economic ladder over time, who may have always been suburban but who are now poor.” Many were pushed down that ladder in the suburbs when their homes and jobs were threatened or lost during the recession.

Reggie Mack has a warning for those who feel comfortable in the veneer of stability in suburban life. 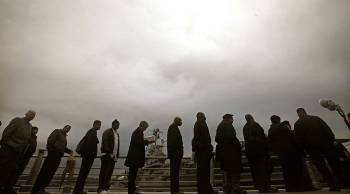