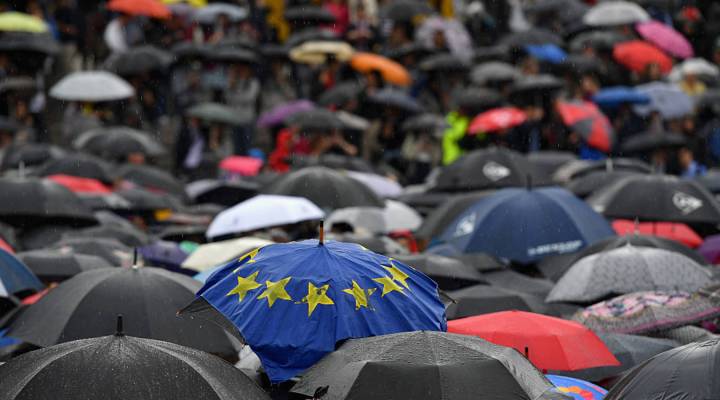 COPY
Protesters gather to demonstrate against the EU referendum result in Trafalgar Square on June 28, 2016 in London, England. Up to 50,000 people were expected before the event was cancelled due to safety concerns. Early evening up to 300 people have still converged on the square to vent their anti-Brexit feelings.  Jeff J Mitchell/Getty Images
Brexit

Protesters gather to demonstrate against the EU referendum result in Trafalgar Square on June 28, 2016 in London, England. Up to 50,000 people were expected before the event was cancelled due to safety concerns. Early evening up to 300 people have still converged on the square to vent their anti-Brexit feelings.  Jeff J Mitchell/Getty Images
Listen Now

With its vote to leave the EU, the U.K. has dropped a big stone in the water; its economic ripples will be felt strongest there, at its source.

But what about outside the U.K.?

“In general, this is regional EU-U.K. shock,” said Mark Zandi, chief economist at Moody’s Analytics, in a webinar Wednesday. “It is not a global economic shock.”

Wednesday, U.S. stock markets closed higher for the second consecutive day, though they have not yet erased their initial post-Brexit losses.

“The statement the British going down rabbit hole is a pretty good one, because there’s so much uncertainty here, so many ways this could go and none of them end up in a good place,” he added.

But he predicted the economic shock wouldn’t be a big deal for the rest of the world, as long as other countries don’t follow the U.K. out of the EU.

“Best-case scenario, we have a sharp downturn in the U.K.,” said Erik Jones, a professor at Johns Hopkins School of Advanced International Studies. “There’s going to be a smaller shock in the euro area, it’s a bigger economy, but a smaller shock, and then those two things are going to exert some drag on the world writ large.”

But he cautioned that Europe’s banks haven’t fully recovered from the financial crisis and that other countries could leave the EU.

“Usually, when periods of disruptions and disintegration begin, they take longer to play out,” said Aaron Klein, a fellow at the Brookings Institution. “If Brexit is the first shoe to drop, rarely is it simply one-time thing. Usually, there are other difficulties in the process.”

He said Brexit may be less a one-time event, more as a harbinger of things to come.