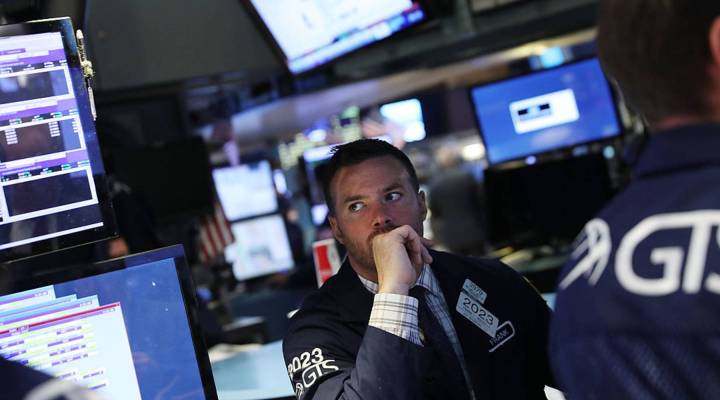 COPY
Traders work on the floor of the New York Stock Exchange on June 27, 2016 in New York City. Markets around the globe continue to react negatively to the news that Britain has voted to leave the European Union.  Spencer Platt/Getty Images
Brexit

Traders work on the floor of the New York Stock Exchange on June 27, 2016 in New York City. Markets around the globe continue to react negatively to the news that Britain has voted to leave the European Union.  Spencer Platt/Getty Images
Listen Now

The global economic turmoil that followed last week’s Brexit has promoted financial advisers to spring into action Monday. Advisers had already been on guard, but the huge market reaction to the surprise “remain” vote meant financial planners had to get emailing. We cleared out our own inboxes and complied their insights for you to peruse.

The prevailing sentiment: Don’t freak out.

Financial planner Craig Larsen sent out an alert after the Brexit results came in.

“Our message to our clients was essentially: hang on. We might have some volatile times, but we’re in it for the long haul,” Larsen said.

Selling stocks in a retirement portfolio because of what happens today, tomorrow or next week could cost a lot of money down the road. A good long-term retirement plan made before the Brexit vote can still work after it.

“If your plan was the right one the day before Brexit, it is still good the day after,” Fidelity’s Jurrien Timmer wrote. Timmer also warned of the potential for stagflation and predicts more government stimulus in both the U.K. and U.S. That’s an “opportunity for active management,” but investors should still stick to their plan.

“Don’t be your own worse enemy by acting emotionally,” he advised, “Your investment mix should be based on your time horizon, financial circumstances and risk tolerance.”

Before the vote, Wells Fargo Investment Institute’s senior global equity Strategist Scott Wren also told people not to panic, emphasizing that investors should stay “assertive” in the face of volatility.

“I think that whatever outcome this vote is, it is in no way, shape or form going to change the trajectory of the domestic economy in particular or the international economy over the next 12 to 18 months,” he told CNBC.

In a follow-up interview with Marketplace, Wren stayed the course, saying global markets’ steep dive was “a buying opportunity.”

“What we’re telling our clients is that this is going to be a buying opportunity for large cap U.S. stocks. We’re down about 5 percent from the recent high right now. That’s not much. One could argue it’s a little bit of noise,” Wren said. “I think in the end, 12 months from now, those who did not buy domestic stocks, large cap stocks, will be kicking themselves for not doing so.”

Charles Schwab tried to put the Brexit vote in context with past shocks to the market: Japan’s 2011 earthquake, the American debt ceiling standoff the same year and the 2012 European debt crisis. Domestic markets saw declines up to six percent on the first day and up to 16 percent overall, but recovered.

“It is important for long-term investors to note that in each of these instances stocks rebounded to their pre-shock level in three or four months, even when a recession took place,” wrote Jeffrey Kleintop, Schwab’s senior VP and chief global investment strategist.

Woodford Funds commissioned research on Brexit’s impact, and found it might not have much economic impact either way, despite initial uncertainty.

“We continue to think that the United Kingdom’s economic prospects are good whether inside or outside the European Union,” the February study concluded. “Britain has pulled ahead of the European Union in recent years, and we expect that gap to widen over the next few years regardless of whether Brexit occurs.”

The firm is sticking by that conclusion after the Brexit vote. GDP will likely flag for the next 18 months, Neil Woodford wrote, and uncertainty is far from over but “my job is to peer through this short-term uncertainty and focus on the long-term fundamentals of the economy and the businesses in which we invest.”

OK, by now the message should be very clear: Stay calm, don’t sell, take the long view. But for some people that’s easier said than done. Financial planner Jeff Rose offered a few tips in U.S. News and World Report. Among them: keep your portfolio at an arms length. It’s too easy to open a brokerage app and check how you’re doing, Rose wrote, but you should fight that urge. This goes both ways too — a little luck can give investors an inflated ego, which will make them sloppy later.

“When it comes to emotional investing — whether out of fear or confidence – the only way to win is not to play,” Rose wrote.

Finally, the New York Times’ Ron Lieber had eight points to keep in mind this week, including, “This is what markets do.” How zen.