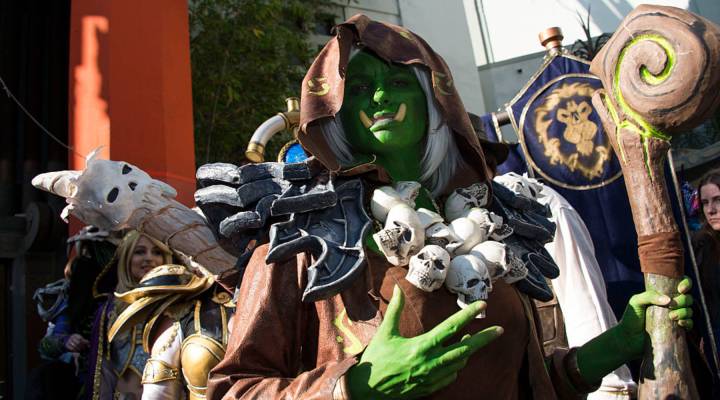 There’s a new movie out this weekend called “Warcraft,” based on the massive multiplayer online role playing game (MMORPG) World of Warcraft. The movie has already made $100 million and counting in China.

But its box office success in this country is a little more unclear. Can loyal gamers power “Warcraft” to a respectable box office take?

I called up Scott Johnson, founder of the Frogpants Studios. He and his co-hosts have been doing a podcast about World of Warcraft since 2006. The game and the podcast, called “The Instance,” were catalysts for a new kind of online career. He’s seeing the movie this weekend, with a whole bunch of friends. To hear more of our interview, click on the audio player above.

You have an army full of people flying in to Utah to watch this movie with you — is that right?

Yeah, if you can call 335 people an army but yes,  we’re gonna fill that [theater] out.

How did this come to pass? This seems to me sort of extraordinary…

It goes a little bit beyond it just being a game, or even it just being a movie. Much to the contrast of a lot of stereotypes out there it is a game that actually encourages a lot of meetups and friendships and people get married in this game, and there’s all kind of relationship stuff going on that can happen in and around the Warcraft franchises, and I think this movie represents another chance for us to all get together hang out talk about our stories and and just have a good time.

Yeah, it’s a big space with a lot of people, a chance for people to sort of group up into guilds and groups that can play on regular schedules, there’s a calendar built into the game so there’s ways to remind you that you’re supposed to be playing with your friends, but even more than that, Blizzard the company who makes Warcraft, they’ve done a great job of extending the fiction outward, into other places,  in comic books and now in film…and because of that I guess, richness, we’ve been able to carve out these weird little niches. It might be a podcast for me, it could be a YouTube channel for somebody else, or uh, you know, somebody  may name their kid Lothar for no reason, so it’s a crazy world!

In a way, yeah! Like in 2006…oh, goodness, the game had only been out a couple years, and in 2004 when the game launched there was no Facebook, there was no YouTube, the communication methods that we that we have now that we sort of just take for granted, even just our smartphones in general, didn’t exist, so this was a place where you could find common ground, where you could find friends that thought like you, and were like you, and create opportunities for meetups and large gatherings.

Are you going to be all right if this movie is just not very good?

Well, the writing’s a little bit on the wall, in terms of the critical response. It’s not doing very well, it’s doing actually quite poorly…I am seeing a very big divide between what critics think and and people who play the game and have passion for the content… they LOVE it and they can’t wait for more of it. SO I hope that translates to more of the kind of box office that may lead to further installments, and that we might finally shed this stigma of video game movies can’t be any good, or more importantly, can’t make any money.