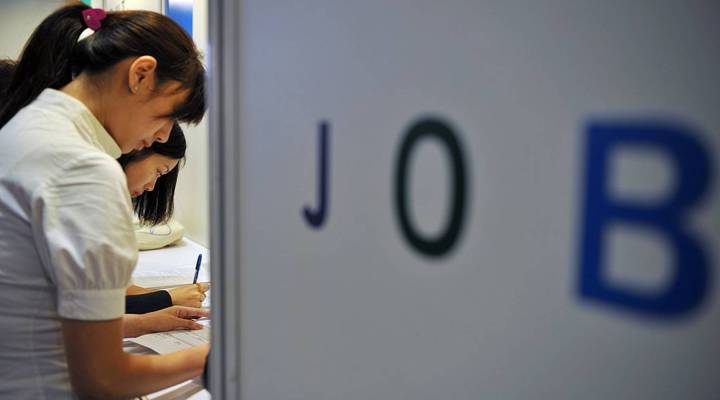 COPY
Job growth slowed down for the month of May, according to numbers released from the Bureau of Labor Statistics, but some economists say we might be reaching sustainable job growth.  LAURENT FIEVET/AFP/Getty Images

Job growth slowed down for the month of May, according to numbers released from the Bureau of Labor Statistics, but some economists say we might be reaching sustainable job growth.  LAURENT FIEVET/AFP/Getty Images
Listen Now

The 38,000 jobs added to the U.S. economy in May, as the U.S. Labor Department has reported, is almost certainly a number that will be revised in coming months.

“The May number looks too weak,” said Nariman Behravesh, chief economist at IHS. “It looks like it’s a bit of a fluke and there are some special factors.” For instance, at least 35,000 striking Verizon workers were absent from May payrolls, and will be counted again in June now that their strike is over.

Behravesh was quick to acknowledge that there has been a significant slow-down in the U.S. job market in recent months, which he called “payback” after the slow-down in overall economic growth in the fourth quarter of 2015 and first quarter of 2016.

But Andrew Chamberlain, chief economist at online job site Glassdoor, believes the current numbers are closer to the new sustainable level of job growth in an economy with low unemployment — now at 4.7 percent.

“As the economy reaches full employment, we just don’t need to generate as many jobs,” said Chamberlain. “To keep the unemployment rate steady, we only need about 70,000 to 90,000 jobs. People should start getting used to a jobs report closer to 100,000 new jobs, than the 250,000 we may have seen two years ago.”

Andrew Stettner at the progressive Century Foundation warned that if this low level of job growth takes hold long term, a lot of people who haven’t seen much of a job recovery so far will be left behind. That includes discouraged workers and others who have dropped out of the labor force altogether; part-timers who can’t find full-time jobs; the long-term unemployed; and teens and new college graduates.

“What I’m concerned about right now,” said Stettner, “is, have we reached a point of treading water? Do firms have the people they need to deal with the level of demand? This is as good as what we get, but it feels very disappointing.”

Nariman Behravesh believes that the last few months represent more of a pause than a permanent slowdown. He said there are already signs that the economy is growing faster than it did over the previous six months, with consumer spending, jobless claims and the Federal Reserve’s regional economic surveys all showing strength. He predicted that 150,000 to 200,000 jobs will be created later this year.