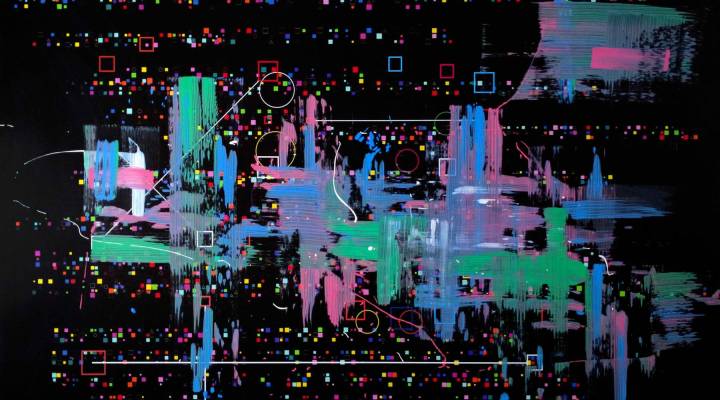 In New York’s Chelsea neighborhood, a growing crowd watches a mirror image of a common street scene. There’s a tow truck and a car, but instead of removing it from an illegal parking space, the truck is lowering it into place, on the sidewalk in front of HG Contemporary Gallery. It’s a late-model VW Beetle in black, but it’s a little hard to tell, because it’s barely recognizable under all the multicolored graffiti, the work of Nelson Saiers.

“The piece is called “Arbitrage,” about one of the strangest events I ever saw in finance,” Saiers explained.

“Arbitrage,” a work by Nelson Saiers on display in front of New York gallery HG Contemporary

The graffiti on the car reference a bizarre moment in 2008 where Volkswagen briefly became the biggest company in the world by market value, driven by short-sellers in a panic. The artist is a former hedge fund manager, whose work is focusing on the most complicated areas of finance.

People stop and gawk at the bizarre car, but few seem to make the connection to finance until they read the work’s description or lean in to hear Saiers explain the piece. Some artists prefer not to talk about their creations. Saiers does so enthusiastically. Many passing by step inside the gallery to see the works on the wall for his solo show.

Inside there are works that deal with financial crises, esoteric trading strategies and mathematical complexities that underlie modern Wall Street. Braille images reference the blindness that led up to the 2008 crash and colorful geometric shapes reference the computer code today’s traders rely on. This may sound dreadfully boring, but the images are striking and his pieces draw people in. They stop and they stare.

There have been books, documentaries and plenty of Marketplace stories digging into the complex causes of the financial crisis. But trying to explain this on canvas is something new.

“I thought it was just extremely original,” said Philippe Hoerle-Guggenheim, the gallery’s founder. “Once you hear the concept, it just becomes even more intriguing. So you have a piece that is aesthetically beautiful, combined with the method and the concepts behind it and it just becomes the perfect storm.”

Hoerle-Guggenheim says the paintings, priced in the low five figures, have gotten a strong response, both from art enthusiasts and Wall Street professionals. Most works in the recent show sold, grossing more than $200,000 altogether.

Saiers was successful enough as a trader that he was able to leave his hedge fund in 2014 to make art full time. He didn’t focus on Wall Street in his early works, though they did reference mathematical concepts that he also used trading derivatives. He says he’s not going back to finance. But over the past few months, he found himself pulled toward saying something about the world he once worked in.

“There’s a lot going on and I’m hoping to at least illuminate some of the issues and some of the complexity involved in Wall Street,” Saiers explained. “I think a lot of those concepts are very beautiful.”

His paintings don’t seem to take a side for or against Wall Street. A viewer can detect anger about the blindness and arrogance that caused the crisis, but also respect for the challenging mathematical work of modern finance and appreciation of its elegance. By going deeply into Wall Street’s most misunderstood corners, the works do something often hoped for in art: taking on a risky theme and creating something more engaging than anyone expected.

Click the video above to hear Saiers explain how math and finance inform his works and the perspective they offer on the 2008 financial crisis.