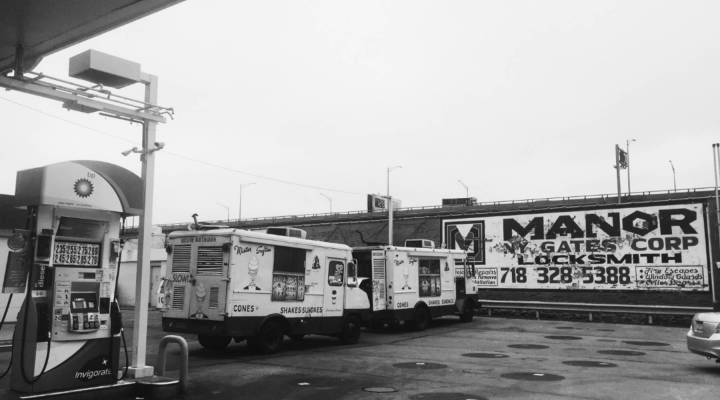 COPY
Mister Softees filling up at the pump. Isabella Kulkarni

On the corner of East 14th street off Union Square, Juliano Centano’s Mister Softee truck is basking in the last patch of afternoon sunlight. He’s dishing out cone after vanilla cone.

He invited me into his vehicle, so I could see where the magic happens.

For Centano, business seems good. And given the six other ice cream trucks surrounding him, he’s found a prime spot. But what’s missing from the scene is that familiar jingle of the Mister Softee truck. And here’s the reason: Trucks can only play the music while they’re moving.

A Mister Softee garage in the Bronx.

Turns out New York has strict rules for ice cream truck music. Former Mayor Michael Bloomberg overhauled the city’s noise code a few years ago, in part because of people like Joe Moretti from Jamaica, Queens. He described how it felt to come home after a long day and hear the jingle.

“The second I would hear that sound, that jingle, I would tense up. It was like they knew I was coming home from work to relax and it was time to do this annoying jingle,” he said.

So Moretti logged onto at nyc.gov, and filled out a form called “report music from an ice cream truck.” And he’s done it about 50 times through the years. And he said recently it’s been pretty quiet.

But it’s far from quiet back at Centano’s truck in Union Square. He points across the street to a trouble-maker.

“You see on Broadway? There’s a competition truck. It’s not a Mister Softee truck. He plays that song all the time,” he said.

The competition’s playing “Pop Goes the Weasel” — not Mister Softee’s song — but try telling that to the police.