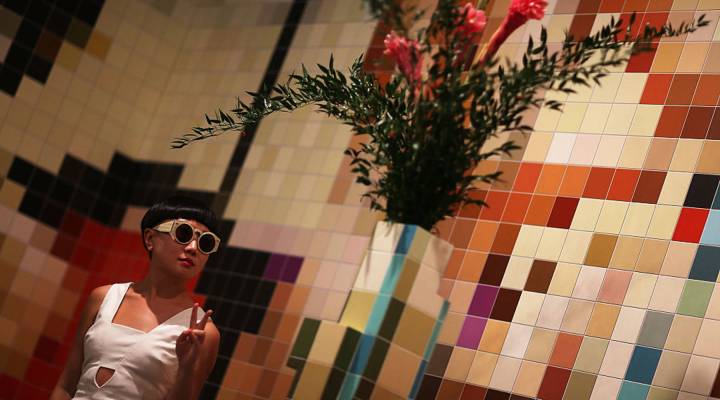 It took a crate, a large truck and lot of rushing for Jennelle Marcereau to get her 40″ X 60″ photographs to Miami from her studio in Seattle.

“We got to FedEx literally like three minutes before the deadline was due to ship out for the next day to the gallery,” she said.

Marcereau is an emergency doctor who moonlights as a photographer. She’s snapped scenes from the North Pole to Antarctica. This is her first time exhibiting at Art Basel Miami, and for her, the fair is a chance to promote herself.

“It’s a perfect opportunity to expose the world to my art.”

For the gallery exhibiting her work, it’s a chance to bring in big cash; it’s asking as much as $4,500 for one of her photos.

Miami is hopping with parties and beautiful people this weekend — more hopping than usual because it’s playing host to Art Basel Miami, one of the world’s most important art fairs. Every year, the event brings together gallery owners, auction houses, artists and collectors who do millions of dollars in business before heading home for the holidays.

According to research from UBS and Art Basel, sales in the global art market hit $63.7 billion last year, up 12 percent from 2016. The United States was the largest market, with 42 percent of worldwide sales. Art Basel Miami accounts for about 10 percent of domestic sales, according to Alexander Forbes, executive editor of the art news website Artsy.

“Two to $3 billion worth of art is usually on view,” he said.

The fair offers one-stop shopping for buyers who tend to be people with high net worth: financiers, tech execs and entertainers. They give the fair a frantic atmosphere.

“People running in the door and having 15 minutes to decide whether they want to buy the $10 million painting,” Forbes said.

But Forbes said the shaky stock market is encouraging buyers to take their time.

If sales slide, that causes the most pain for small galleries.

Sarah Douglas is editor in chief of the industry magazine Art News. She said galleries pay a fee to exhibit at the fair, and it’s a big ask for a small gallery.

“Let’s say, you know, God forbid, you don’t sell anything, you could close because some galleries are running that tight a ship,” she said.

She said the art fair is trying to address that problem starting next year by getting bigger galleries to subsidize smaller ones.