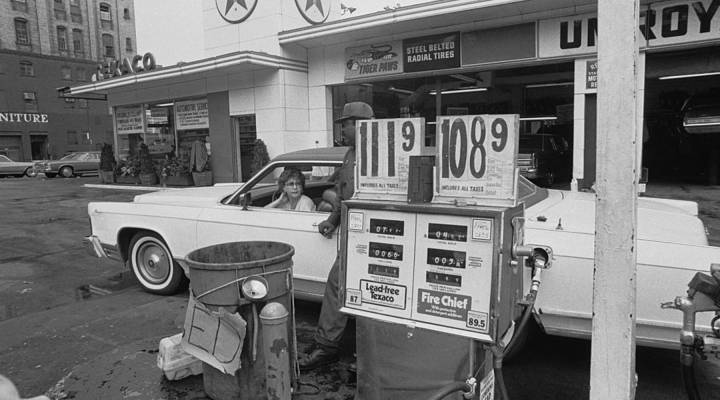 COPY
An attendant at a Texaco petrol station on 1st Avenue and 37th Street, New York, during a fuel shortage in June 1979.   Brian Alpert/Keystone/Hulton Archive/Getty Images

Oil producers in the United States pumped an average 8.7 million barrels per day last week, according to the department of energy. Although that is impressive, this was not always the case.

In October of 1973, the Arab members of OPEC placed an embargo on the U.S. in response to its support of Israel and the Yom Kippur War. The result was an oil shortage across the country, and a crash course for Americans on the limits of their government’s power.

Meg Jacobs wrote about the energy crisis in her book, “Panic at the Pump: The Energy Crisis and the Transformation of American Politics in the 1970s.”

Hear Jacobs’ conversation in the audio player above and read an excerpt below.

Forty years ago, Americans were suffering from what contemporaries called “the energy crisis,” a crisis that in many ways defined the decade of the 1970s. During the twin oil shocks of 1973 and 1979, oil supplies dropped and prices soared, and the average citizen understood the energy crisis to mean a panic at the pump— the fear that we would not have enough oil to fi ll up our gas tanks, heat our homes, or run our factories. And whatever fuel we did have would go up and up in price. Ever since, gas lines, cardigan sweaters, dark Christmas trees, and even wood stoves have become part of the collective memory of that era. At the time, Americans worried that life as they had come to know it— big cars, big suburban homes, and boundless consumption— was over. John Updike’s title character Rabbit Angstrom summed it up best when, surveying his car sales lot, he thought, “The great American ride is ending.”

Part of what made this a “crisis” was the sense that it happened all at once. The crisis began when the Arab producers of the Organization of Petroleum Exporting Countries (OPEC) put in place an embargo on oil exports to the United States in October 1973 and threatened to cut back overall production 25 percent. Led by Saudi Arabia, these Arab states sought to retaliate for President Richard Nixon’s support of Israel against an attack from Egypt and Syria in the Yom Kippur War. The oil sheikhs wanted to change American foreign policy, making it less friendly to Israel, and they also hoped they could wield their so- called oil weapon to raise the price of this precious commodity. With less oil on the market, prices would jump. Indeed, by December, the OPEC oil ministers had quadrupled the selling price of each barrel of their oil, telling buyers to take it or leave it.

As soon as they announced an embargo, one of President Nixon’s top advisers dubbed it “an Energy Pearl Harbor.”2 There were no bombs, no bloodshed, no loss of life. But the embargo stunned Americans, as if they had come under a surprise attack, if not an outright act of war, because of the serious implications for the economy and the country’s security. By 1973, Americans relied on oil for almost half of all their energy needs, and each day imports made up an expanding portion of the country’s supply. Americans were vulnerable to scarcity and shortages as well as to higher fuel prices, which rippled through the entire economy and plagued the pocketbooks of all consumers. Oil was both the lifeline of the economy and a vital resource for the country’s national defense. American oil had played a decisive role in the Allies’ World War II victory, and with the Cold War raging on, U.S. oil remained a top national security concern.

The news was also stunning because the public was generally not aware that the country imported any oil at all. The United States was still the greatest single producer of oil in the world, as it had been since 1901, when Spindletop, near Beaumont, Texas, became synonymous with a sometimes uncontrollable 150- foot- high gusher of black gold. But with the spread of cars, suburbs, and factories in post– World War II America, demand rose faster than supply. In 1970, U.S. oil fields reached their peak of production at 9.6 million barrels per day. Imports quickly filled the gap between what Americans produced and what they consumed, more than doubling in volume between 1970 and 1973, when the United States was importing 36 percent of its oil.

The embargo did not stop the oil tankers already en route from the Middle East from completing their journeys. But the Arab countries ordered the major oil companies operating in the Middle East, which included the American corporations of Exxon, Texaco, Standard Oil of California, Gulf, and Mobil, to halt any future shipments to the United States. These multinational corporations were powerful, but they were nothing without access to oil in the ground, which the OPEC members owned. No one knew for sure when the embargo would end; the White  House was projecting a loss between 10 and 17 percent of the country’s gasoline supply. It was hardly a total shut off , but the use of the oil weapon sounded a clarion call, ushering in a future world very different from the recent past. The gas lines that curled their way across the American landscape seemed to embody a mentality that was a far cry from the 1950’s motto “Fill ’er up.”

In the winter of 1973–74, during the darkest days of the embargo, that sense of optimism, of unlimited bounty, was gone, replaced by doom and despair. The New York Times ran an article, one of a countless daily barrage, “For Gasoline, Little Is Certain but High Prices.” It featured an eighteen- year- old nursing student from Westchester County, New York, who was searching for fuel at the height of the shortage. After visiting her sick mother, she got in her first gas line at 7:00 a.m., needing to get enough fuel to get back to college. By the afternoon, she still had not had any luck. “They closed down four lines on me this morning,” the young student complained. When she finally landed in her last line, where she would have to wait for another hour, she “craned her neck toward the service station and gazed disconsolately at the 50 cars ahead of her, all waiting for a turn at the gas pump.”

Despair bled easily into anger, especially at the American oil companies. Feeling they had few choices but to comply with the Arab producers, these companies cut off shipments and cut back overall supply. But the public found it hard to believe that the oil sheikhs could tell these corporations— the biggest, most influential companies in the country ever since the days of John D. Rockefeller— what to do. Instead, the vast majority of Americans, something like three- quarters of the public, insisted that Big Oil, as the industry was disparagingly known, created an artificial shortage. Rumors spread that tankers were waiting off shore, hoping to jack up prices as pumps ran dry. This sense of crisis, whether people believed it was real or manufactured, quickly triggered a panic, with drivers topping off at every chance, waiting in line so long they ran out of gas. These panic purchases magnified the shortage, because drivers chose to put gas in their car tanks rather than leave it in storage in the ground. A New York Times columnist captured the crisis mentality, writing, “ ‘Chaos is come again,’ to borrow a phrase from Othello, but our chaos arises from an ‘energy crisis’ about which no two people, even the best authorities, seem to agree, and this disagreement encompasses the legitimacy of the ‘crisis,’ its extent, and what to do, and how and when.”

If Americans were mad at the oil companies, they were even madder at the nation’s politicians who seemed unprepared and unable to resolve this crisis. “We appeal to you for relief from the disastrous fuel situation in Central New Jersey,” a group of housewives wrote to the president. By now, Nixon was already suffering politically because of his troubles from the Watergate break-in and the White House cover-up. The panic at the pump threatened greater political trouble for the weakened president. A resident of Fair Lawn, New Jersey, complained, “What is worse than ‘Watergate’ and all the various charges against the President? Answer— the gas crisis in Bergen County.”

Americans sent letters to the White House because they expected the president to do something. Th at mind-set reflected the persistence of a New Deal mentality, one born in the depths of the Great Depression, that not only saw markets as malleable and businessmen as manipulative but also regarded the president and his policy makers as both responsible and capable of providing relief. “Government has final responsibility for the well-being of its citizenship,” said Franklin Roosevelt. In this view, dominant for much of the early postwar era, politics and the market did not exist in separate spheres but were one; wages, prices, profits, production— all resulted as much from negotiations in congressional hearing rooms and in the halls of Washington’s regulatory agencies as from the wheels of commerce.

Politics and policy making were also central to recessions, unemployment, and inflation, according to this view. In 1952, in American Capitalism, the liberal economist John Kenneth Galbraith described what he saw as the secret to the country’s success. The nation had a political economy that worked to generate robust levels of steady economic growth. He stressed the importance of countervailing powers— the trade unions and consumer groups, which bargained with the nation’s businessmen— all under the watchful eye of Washington politicians who stood ready to provide a stabilizing force in the marketplace. Without this system, he wrote, “private decisions could and presumably would lead to the unhampered exploitation of the public.”

The energy crisis ultimately helped shift American politics to the right in the 1970’s and bring an end to Galbraith’s conception of the American system. This seismic shift in national politics, however, was anything but inevitable. When the crisis began in 1973, the strong arm of the New Deal seemed intact for much of the country. That outlook— one that saw government as the solution to national crises— resulted in a dramatic expansion of government intervention, especially as liberals in Congress advanced policies to place price controls on oil and create the Department of Energy (DOE) as a massive new government agency. The problem of shortages caused by international events was new, but the political solutions— from price controls to rationing to antitrust initiatives to break up Big Oil— were old. Washington was stuck in the past.