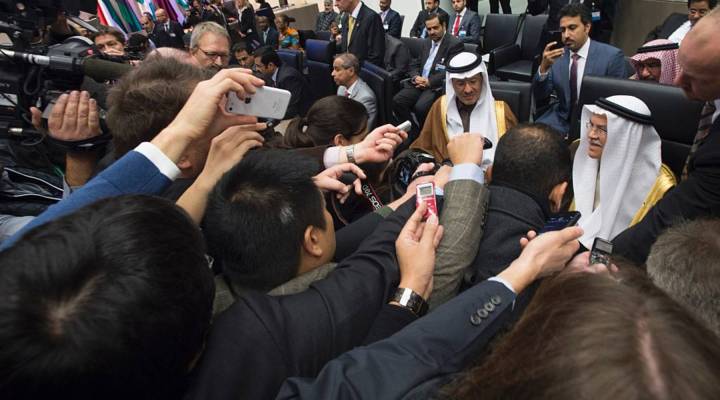 COPY
Saudi Arabia's minister of Oil and Mineral Resources Ali al-Naimi is surrounded by journalists at the OPEC headquarters in Vienna, on December 4, 2015. JOE KLAMAR/AFP/Getty Images

Several big oil producers, including Saudi Arabia, Russia and Iraq, will hold a long-awaited meeting Sunday in Doha, Qatar. On the docket: a plan to freeze production at current levels — that is, to control supply in an oversupplied world and try to push up prices.

But the world oil glut, which has kept prices low for more than a year, may be starting to evaporate already.

To many, any announcement to freeze production already reflects reality.

“Nobody seriously believes that amongst the ranks of most of the countries attending the talks, they have any ability to significant increase their production in any event,” said Neil Atkinson, of the oil markets division of the International Energy Agency in Paris. “It’s just essentially the status quo.”

There is one wildcard: Iran has production headroom and could undercut a deal. But the broader market reality beyond the meeting is that overall world oil supply is already falling. OPEC gains are more than offset by reductions in non-OPEC countries, particularly the United States.

“We are slowly moving from a supply glut to a balance,” said analyst Jim Burkhard of IHS Energy, speaking from Oman. “U.S. production is down about 500,000 barrels per day from last April. That’s the biggest driver in this rebalancing that is underway.”

Pair that with hearty world demand growth, and Burkhard and the IEA project that the world glut could be gone in a year.

So if the market’s doing its job, why are the producers meeting? For one, struggling Petro-states could benefit from sending key signals to domestic audiences back home.

“The citizens are wondering, ‘there must be something you can do,'” said Omar al-Ubaydli, international studies director of the Bahrain Center for Strategic International and Energy Studies and affiliated professor of economics at George Mason University. “So, just like when you get a crisis in any country, it’s not acceptable for the government to look like it’s doing nothing. So they have to at least look like they are doing something.”

And he said it’s important to keep signaling to the market that prices are going up and may continue to. The price of crude has risen for three months now, from less than $30 a barrel to more than $40.