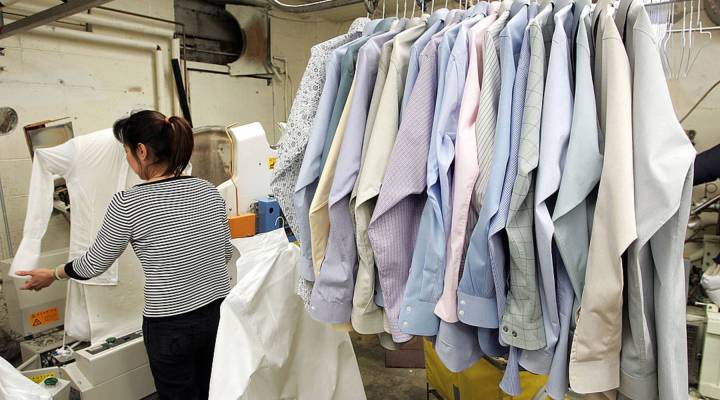 COPY
A worker at Sohn's French Cleaners, which uses eco-friendly chemicals to dry clean clothes, presses shirts in 2007 in San Francisco. A proposed law would give the Environmental Protection Agency the authority to evaluate whether certain chemicals should remain on the market. These chemicals include Trichloroethylene, which is typically used in dry cleaning, protective coating and industrial greasers. Justin Sullivan/Getty Images

A worker at Sohn's French Cleaners, which uses eco-friendly chemicals to dry clean clothes, presses shirts in 2007 in San Francisco. A proposed law would give the Environmental Protection Agency the authority to evaluate whether certain chemicals should remain on the market. These chemicals include Trichloroethylene, which is typically used in dry cleaning, protective coating and industrial greasers. Justin Sullivan/Getty Images
Listen Now

U.S. lawmakers really don’t like each other. And when you take that into account, they pulled off quite a feat Tuesday. By a vote of 403 to 12, the House agreed on a bill that for the first time in 40 years updates the rules on chemical safety.

The Toxic Substances Control Act of 1976 has been criticized as woefully inadequate when it comes to protecting consumers. This new bill is expected to pass the Senate this week, and be signed into law by the president. It will give the Environmental Protection Agency new powers of regulation.

“A lot of people are jubilant about the the bill. “This is a really big deal,” said Richard Dennison, a senior scientist at the Environmental Defense Fund.

For one thing, it’s the first major environmental legislation to pass in 25 years. He said it went through because the damage chemicals can cause affects everyone, no matter their political stripes.

“People know someone who got breast cancer at an early age or who was unable to conceive a child,” he said. “Those are the kinds of effects we’re concerned about chemicals contributing to.”

Take Trichloroethylene. It’s used in spot cleaners used by the general public and dry cleaners, and it’s a known carcinogen. Dennison said now the EPA can go after the uses that cause the most harm.

Even the chemical industry is relieved about the new rules. Cal Dooley heads the American Chemistry Council. He said consumers were losing trust in chemical products.

“We felt that by giving EPA greater access to information that our companies would produce, that it would allow them to make a more affirmative determination of the safety of our chemicals in commerce,” he said.

In other words, it’s about business. The industry has had to contend with stores taking matters into their own hands, refusing to stock certain plastics. States have also brought in their own regulations.

Melanie Benesh is an attorney with the Environmental Working Group. She said one problem is that the EPA isn’t getting enough funding. The chemical industry is kicking in $25 million to help pay for chemical reviews. Still, she said, “For an industry that’s reported close to $40 billion in profits, that’s really pocket change.”

She said to do the job right the EPA is going to have to rely on Congress, which has often opposed the agency.