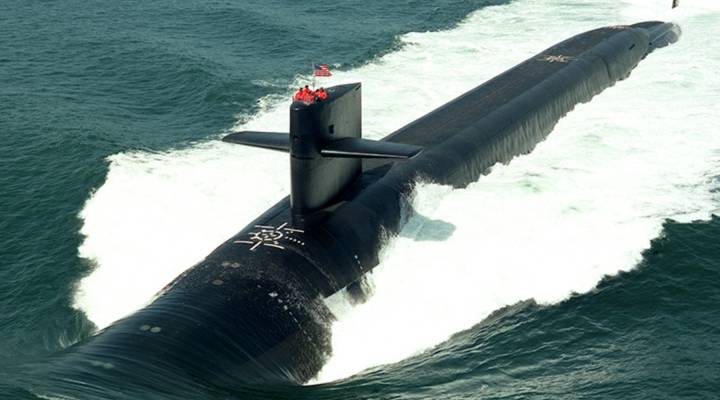 COPY
Trainees have done a mixture of note-taking and hands-on work so far. Harriet Jones/WNPR

Trainees have done a mixture of note-taking and hands-on work so far. Harriet Jones/WNPR
Listen Now

The Navy recently picked General Dynamics Electric Boat shipyard in Connecticut to build 12 new submarines, in what could be a $100 billion project. It should secure the future of the yard for the next couple of decades, but in the meantime, hiring thousands of workers presents a few challenges in an economy where manufacturing was on the decline.

After hours at a technical high school in Groton, a small class of men and women gathered around instructor Robert Morelli to prepare for a hands-on measuring test.

“Take your measurement more than once, take it twice,” he advised them, before going on to give a discourse on the relative merits of micrometers and calipers. His students listened intently. There’s a mix of ages and backgrounds: some unemployed, some career changers, others part-time in college. All know they’re lucky to be here.

Robert Morelli (center) oversees his students as they prepare for a measuring test.

For decades, Groton was the company town of submarine maker Electric Boat. But in the ’90s, after the end of the Cold War, shipbuilding declined, and the two largest casinos in the world, Foxwoods and Mohegan Sun, were built nearby. Blue-collar work in this region shifted from welding and machining to bartending and table game dealing. But now, after the Great Recession, the casinos are struggling with declining revenues and layoffs, and the Navy has doubled down on submarine production. So the shipyard is hiring.

But there’s a hitch, according to Electric Boat principal engineer Pat Larkin.

“What we are finding when we go to interview people is that we’re not getting the basic skills required to enter into the manufacturing field,” he said.

According to Larkin, applicants no longer have what it takes — from math competency to handling tools. A new training course was needed. And that meant bringing together local colleges, high schools, the shipyard and other manufacturers to create an effective, tailored curriculum.

“I won’t say that in those meetings that there wasn’t a little glass being broken and feelings being hurt temporarily,” said John Beauregard, laughing. He’s executive director of the Eastern Workforce Investment Board and the moving force behind implementing a $6 million federal grant to create several different approaches to developing this new workforce.

The Groton yard is the largest of Electric Boat’s manufacturing locations.

“The need to start to rebuild our manufacturing infrastructure required a very devoted effort on behalf of, frankly, all the community residents,” he said.

Marjorie Valentin develops workforce and community education at Three Rivers Community College in nearby Norwich, one of the partners in this course. She agreed this is a key moment for the region. “It’s a workforce that needs to be recreated,” she said. “It’s a different skill set from the past.” The intention is also that the model that’s being developed in this corner of Connecticut could be replicated across the country.

Back in class, 24-year old Monica Bonner said her past employment has been a patchwork, “everything from driving semis, school buses, personal care assistant, retail. I’ve kind of done whatever.” Now, “it’s a big investment in my future to be able to be here — I’m really honored.”

Jason Barnwell, 29, used to work at the casinos in maintenance. Now he’s learning one end of a boat from the other, and also hoping for a sustainable career.

“I want to become a machinist, but I will move up the chain,” he vowed. “I want to be in the corporate side — get my experience in the trade and then advance through the company.”

Robert Morelli, the instructor, knows a bit about that kind of longevity. He worked at Electric Boat for more than 30 years. He jumped at the chance to come out of retirement to pass on his knowledge.

“I told all those students, you know you guys are very fortunate,” he said. “EB is going to build up right now. They’re going to go back to the numbers I worked with. Eighteen thousand people in that shipyard. And that’s a blessing for you and your future.”

And there seem to be plenty who realize it; in the first six weeks it was advertised, this course attracted 600 applicants.