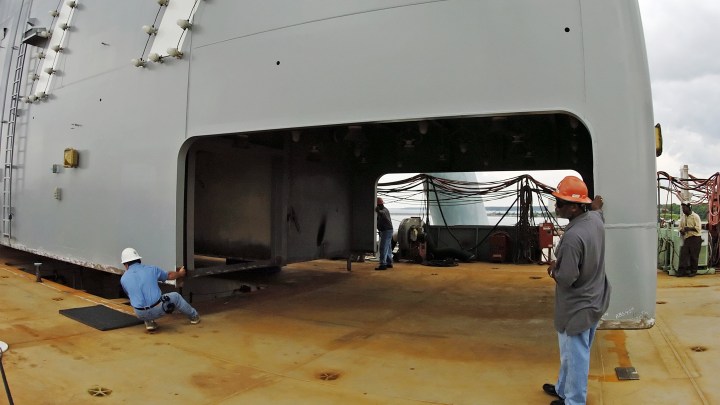 When Stan Best was finishing high school in the 1980s, everyone from his parents to high school guidance counselor were in agreement: he should go to college.

“I went to Virginia Tech for about a year and a half and I left before they could throw me out. I was responsible for paying for my own way,” Best said. He wasn’t getting much out of it. Then his brother encouraged him to apply for an apprenticeship at Huntington Ingalls’ Newport News Shipbuilding, where workers build aircraft carriers and submarines for the military.

“It’s very pragmatic, it’s very hands-on and practical with what the student is doing down on the waterfront,” he said.

Best trained as an electrician, went on to become a nuclear reactor test engineer and eventually returned to the apprentice school to train future shipbuilders.

“To tell somebody who is going to be a blue-collar worker that, in the future, you could end up with a six-figure job,” Best said, “it’s not what they’re normally hearing in the high schools.”

The number of people doing apprenticeships in the U.S. has climbed steadily in recent years. According to the Labor Department, there were more 500,000 people obtaining skills while pulling a salary in 2018.

Sponsored by employers, schools, unions and industry associations, apprenticeships are increasingly seen as a way to fill critical, skilled jobs in a tight labor market.

Compared to countries like Germany and Australia, though, the U.S. has an undeveloped apprenticeship system. And some people want to see more apprenticeship programs here.

Joseph Fuller, professor of management at Harvard Business School, said expanding apprenticeships in the U.S. will require a change of thinking.

“We have been preoccupied with a college-for-all mindset. And that is not bearing the fruit that we hoped,” he said.

Fuller said too many young people are finishing college with huge debt loads and working in jobs that don’t — or shouldn’t — require a college degree. He estimated there are currently three million job openings in the U.S. where apprenticeships would make more sense, many of them in banking, health care and technology.

Tiffany Spraggins worked as an apprentice at Accenture in Chicago and now works as a software tester for the consulting firm.

“I didn’t even know there was a possibility for me to work in this field until I applied for the apprenticeship program and got accepted,” she said. “I didn’t have to go into debt and I didn’t have to spend so much time in school because the time that I would have spent in a traditional program, I was actually on the job getting real life skills and real life experiences.”

Apprenticeship programs like Spraggins’s aren’t just helpful for job seekers, but can help employers address one of the biggest challenges in the labor market today, said Nick Wyman, who heads the nonprofit Institute for Workplace Skills and Innovation: labor market mismatch.

“Employers can’t find the people with the skills they need, yet there’s a lot of educational institutions that have been churning out people,” he said, “so there’s this labor market mismatch.”

To help close that skills gap, the Trump administration is expected to finalize a regulation soon that will create a new kind of apprenticeship, run by businesses, schools unions and other groups.