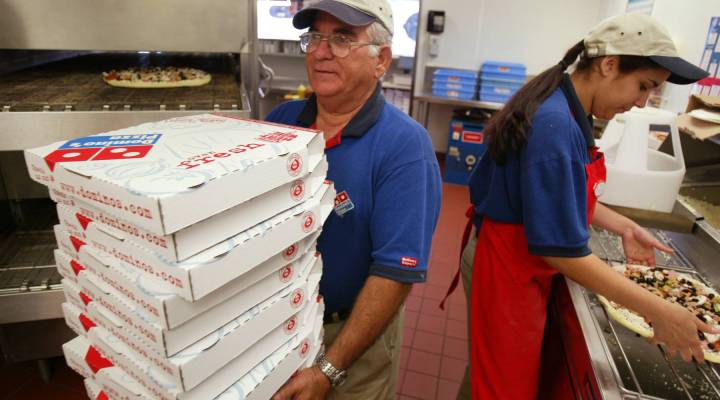 The alleged violations include paying workers less than minimum wage, not paying overtime, abuse of the tip credit, and failure to fully reimburse employees for using their cars or bicycles for delivery.

Domino’s executive vice president for investor relations, Tim McIntyre, said in a statement emailed to Marketplace that the company was “disappointed to learn that the Attorney General chose to file a lawsuit that disregards the nature of franchising and demeans the roll of small business owners.” He wrote that the company rejects the assertion that Domino’s bears joint legal responsibility for alleged labor-law violations with its franchisees, saying the franchisees “are solely responsible for the hiring, firing, and payment of their own employees…”

Schneiderman’s case utilized a “joint employer” legal theory to go after both the franchisor and franchisees in the case.

“There are a broad range of circumstances in which a company can be found to be a ‘joint employer,'” explained labor lawyer Michael Rubin, a partner at San Francisco law firm Altshuler Berzon. Rubin has litigated several joint-employer class-action lawsuits against McDonald’s and Walmart.

Under the theory—which is supported by state and case law—a parent company can be held jointly responsible for wage theft, even if it doesn’t pay franchise workers directly, if it provides tools or processes that control economic and labor conditions in the workplace.

“If you have timekeeping software that you’re requiring a contractor or franchisee to implement, that enables them to monitor exactly what the workers are doing, the more the workers actions are controlled, the more likely the entity is to be found to be a joint employer,” said Rubin.

In the New York case, the Attorney General alleged that Domino’s “urged franchisees to use payroll reports from the company’s computer system (called “PULSE”), even though Domino’s knew for years that PULSE under-calculated gross wages.” As further basis for the “joint employer” claim, the suit alleges that Domino’s controlled work and employment practices at its franchisees, including discipline, hiring and firing of specific workers; staffing and scheduling; imposing a strict dress code and enforcing it with inspections; and pressuring franchise-owners to pursue an anti-union policy dictated by the company.

Matt Haller, a spokesman for the International Franchise Association, a trade group for franchisees and franchisors, said the New York Attorney General was pursuing a “political agenda” through the lawsuit and other recent enforcement actions against fast-food chains.

“The unions, and in some cases the trial attorneys, want to bring lawsuits against large brands because they see deep pocketbooks,” Haller said, adding that the goal is to undermine franchising as a profitable and viable business model.

Catherine Ruckelshaus at the National Employment Law Project said recent surveys from both government agencies and private-sector sources have found a growing problem of wage theft, and a growing docket of litigation to combat it.

“It’s off-the-clock work, it’s illegal deductions from pay, it’s mis-classification of workers as managers to deny them overtime pay,” said Ruckelshaus. “It’s a persistent and chronic problem that is very difficult to address given our current enforcement system.”

Ruckelshaus said the problem of workers being cheated of their wages is most egregious in industries that utilize multiple contractors and subcontractors to employ low-wage workers at arm’s length from the big corporations that control the market or supply chain. She said the problem is widespread in industries such as big-box warehousing, office-cleaning, farm work and fast food.