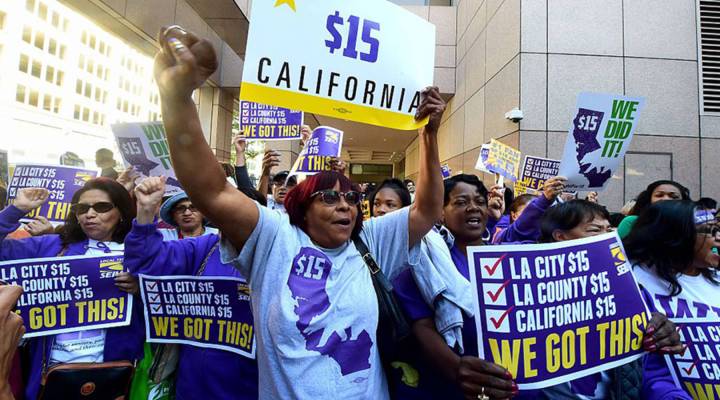 COPY
Workers celebrate outside the Ronald Reagan State Building in downtown Los Angeles on April 4, 2016, after California Gov. Jerry Brown signed a bill that will raise the state's minimum wage to $15 an hour by 2022. FREDERIC J. BROWN/AFP/Getty Images

Workers celebrate outside the Ronald Reagan State Building in downtown Los Angeles on April 4, 2016, after California Gov. Jerry Brown signed a bill that will raise the state's minimum wage to $15 an hour by 2022. FREDERIC J. BROWN/AFP/Getty Images
Listen Now

Raising the minimum wage is a perennial issue in the business and economic news cycle. But according to a new investigation from Politico, we might do well to focus on enforcing existing wage laws first and make sure workers are paid what they’re owed. When they’re not, it’s wage theft. Marketplace’s Kai Ryssdal spoke with Marianne Levine, who wrote the story. The following is an edited transcript of their conversation.

Kai Ryssdal: If I feel, then, that I am a victim of wage theft, what do I do?

Marianne Levine: If you’re a victim of wage theft, you have three options. You can either go to the federal Labor Department, which has no obligation to take your case. You can go to a state agency if you happen to live in a state that has investigators who enforce minimum wage and overtime laws. Or you can hire a private attorney, but that option is difficult for low-wage workers, since most people can’t afford it.

Ryssdal: Back up for a minute — the federal Department of Labor has no obligation to take my case?

Levine: The federal Labor Department has a tendency to prioritize cases that will affect the most workers and recuperate the most money because of the fact that they only have 894 wage and hour investigators in the country.

Ryssdal: OK, it’s interesting, you say they only have 894 wage and hour investigators in the whole country because there are states, you say in this piece, that in fact have none! Zero!

Levine: There are six states in the country that have no investigators who are devoted to minimum wage and overtime. Now, some of those states do have labor departments and they do look into certain issues like child labor. But if you are not getting the minimum wage and you’re not getting overtime, workers in places like Louisiana, Tennessee and a couple others have the only option of either hiring a private attorney or going to the federal Labor Department.

Ryssdal: OK, but if I’m making $9.42 hour working whatever job I have, I can’t afford a private attorney.

Levine: That’s accurate. So it makes it really difficult for those workers who don’t have that option. So the only option they really have is to go to the federal Labor Department, which may or may not take the case.

Ryssdal: Do you have a sense of how widespread wage theft is in this economy?

Levine: It’s difficult to determine how widespread wage theft is. We have studies from some left-leaning organizations like the Economic Policy Institute that estimated in a study last year that there is about $15 billion that’s lost in minimum-wage violations alone. But it is difficult to know how broad wage theft actually is, because one issue is many workers don’t tend to report it because they’re afraid of employer retaliation and other issues. It’s just very hard to track. States don’t keep track of data that would relate to this topic.

Ryssdal: Who does wage theft? I mean, it’s not like G.E. who’s stealing people’s wages, right?

Levine: It’s hard to generalize who does wage theft, but a lot of the violations that affect workers are small contractors or small businesses. And oftentimes these small businesses might not have a lot of assets themselves, so they can either go bankrupt or they can decide to transfer their assets and open under a different name. And so a lot of the organizations that workers work for are small companies that don’t have the general counsels who are going to enforce and make sure everyone is compliant with wage-theft law.

Ryssdal: This is an unkind thing to say about the American political class, but here goes: Minimum wage and raising the minimum wage is a sexy political issue. Getting down into the weeds of wage theft and wage-theft enforcement clearly is not.