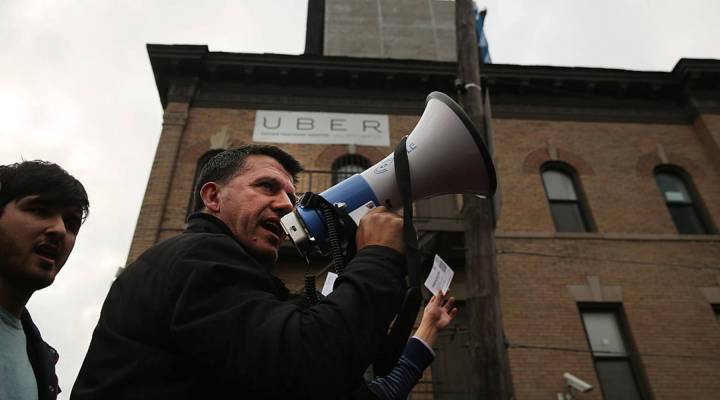 Uber driver representatives speak to hundreds of Uber drivers as they protest the company's recent fare cuts and went on strike in front of the car service's New York offices in February. The company just struck a deal to formalize a drivers' group to represent the independent contractors during meetings with Uber management. Photo by Spencer Platt/Getty Images

Uber driver representatives speak to hundreds of Uber drivers as they protest the company's recent fare cuts and went on strike in front of the car service's New York offices in February. The company just struck a deal to formalize a drivers' group to represent the independent contractors during meetings with Uber management. Photo by Spencer Platt/Getty Images

Uber has struck a deal with a union to create an association for its New York drivers, the company announced Tuesday. The agreement creates representation for the group, but won’t actually unionize the drivers.

This means drivers will receive more benefits, like paid time off and parental leave, but the union won’t be able to do any collective bargaining on behalf of the drivers, according to The New York Times. The association, called the Independent Drivers Guild, is the first group of its kind to be officially recognized by Uber.

The goal, according to Uber’s chief adviser David Plouffe, is to increase communications between Uber and drivers, and give drivers a way to dispute decisions made by the company to bar drivers from the app. The union representatives will also get “regular” meetings with the New York management team.

“We haven’t always done a great job working with drivers,” Plouffe wrote in a blog post. “As our CEO, Travis Kalanick said two weeks ago, that’s not good enough. It’s time for a change.”

The agreement comes amid public scrutiny over Uber’s treatment of its drivers, which customers hail for rides through the company’s app. The company’s business model treats drivers as independent contractors, which means laws meant to protect full-time employees of a company don’t apply.

This move may also have larger implications for the so-called gig-economy, which depends on contractors to keep labor costs low. As the these services, which ranges from grocery delivery services to help with personal tasks, have grown in popularity, so has the questions around regulation and labor laws.

Uber’s own legal woes are representative of these issues. The company settled a $100 million class-action lawsuit with drivers in California and Massachusetts in April. While about 400,000 drivers were expected to receive a payment from the suit, the settlement meant Uber could continue to treat drivers as independent contractors. Uber’s latest labor dust-up, which included its rival Lyft, resulted in a failed $8.6 million campaign to overturn increased safety regulations in Austin, Texas.

The fight between Uber and New York regulators has been especially tough for the company due to the taxi industry’s stronghold on the car service industry in the state. As part of the 5-year agreement, Uber wants the guild to take up the fight for ride-hailing trips to be taxed the same amount as taxis or private for-hire car services.

The machinist union associated with the new Independent Drivers Guild also agreed to refrain from trying to organize drivers through strikes or legal campaigns over their status as independent contractors. But, if the courts decided during that time that Uber should be treating its drivers as employees, the union could then try and unionize the drivers, guild founder James Conigliaro Jr. told the Times.