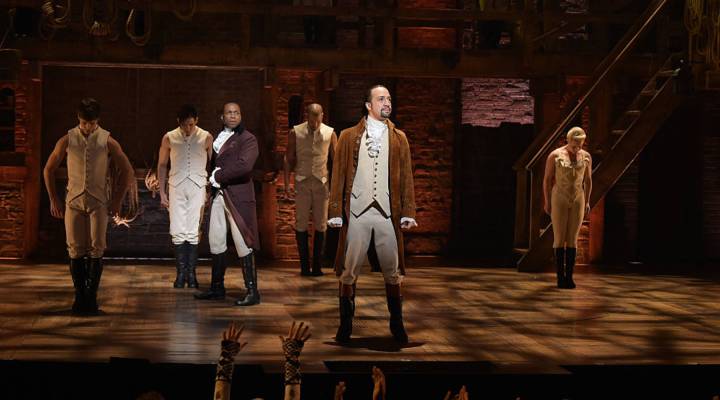 This year’s Tony nominations are out, and “Hamilton” cleaned up with a record 16 nominations. If getting tickets used to be a long shot, it’s probably now next to impossible. But there are alternative means: You have to know a guy and know how to sweet talk him.

His name is Sam Rudy, and he has a casual personal style, as if to say, “Who me? I’m no big deal.” He wears gray New Balance sneakers and keeps a cramped little office with piles of paper everywhere. But make no mistake. As “Hamilton’s” PR guy, this modest man is a shrewd power broker. Look for the clues among the scattered documents. Here are two boxes wrapped in shiny paper — could it be Champagne? And here’s a fruit basket.

“This is from somebody we helped to get hard-to-get house seats to ‘Hamilton,’” Rudy said before picking up another thank you gift — a box of cookies.

There are 1,319 seats in the Richard Rogers Theatre. For every showing of ‘Hamilton,’” only a small number are not sold to the general public. They’re reserved for critics, celebrities, politicians, family members, professional colleagues, theater people.

Sam Rudy uses a three-ring binder to keep track of the names of people who will get house seats to “Hamilton.”

He suggests we meet up a little later at the Richard Rogers Theatre. A group of almost 600 high school kids is coming in from Bay Shore, Long Island, for a matinee, and Rudy wants to make sure it all goes smoothly. But Rudy is a no-show.

The reason soon becomes clear: A controversy has erupted over a casting call for “Hamilton,” which specifically calls for “nonwhite men and women.” Social media goes into a frenzy.

Rudy meanwhile, was working with the show’s producers to formulate a response. It reads, in part: “It is essential to the storytelling of ‘Hamilton’ that the principal roles — which were written for non-white characters (excepting King George) — be performed by non-white actors. This adheres to the accepted practice that certain characteristics in certain roles constitute a ‘bona fide occupational qualification’ that is legal.”

New York Magazine called the statement “so effective, it’s like a Founding Father himself wrote it.”

“I don’t take credit for that. That was a team effort that I helped manage,” Rudy said.

Maybe you’re wondering how to impress Sam Rudy, how to invent some reason for him to give you a “Hamilton” ticket. Rudy said it really helps to be famous. And even if you are famous, when you make your request, make sure to phrase it politely.