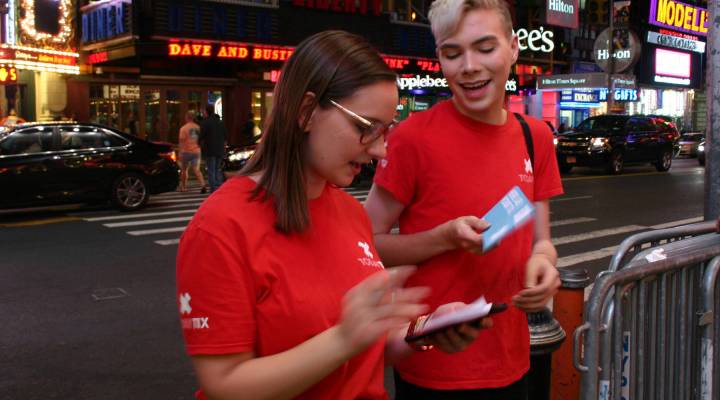 COPY
Katie Szajkovics and Christoper Huey, two of TodayTix concierges, stand outside the theater and distribute tickets to customers.  Jana Kasperkevic for Marketplace

On an unusually warm evening this fall, Cierra Gause got dressed up and took her friend, Oje Belo, to a Broadway show. The two tickets to see a revival of “Time and the Conways” cost her only about $40 thanks to a digital lottery held by TodayTix, an app for theater tickets.

This isn’t the first time that Gause has used the app to look for tickets that are affordable. “Especially for students like me,” she added.

Gause does not look like your typical Broadway show audience. For one, she is young — she graduated high school in 2016. She is also black. Both demographics that make up a small percentage of typical theatergoers. More than 13.3 million people went to see a Broadway show during the 2015-2016 season, according to data compiled by the Broadway League, the national trade association for the Broadway industry. The average age of the Broadway audience during that season was 44 years. What’s more, 77 percent of all tickets were purchased by white theatergoers.

The numbers start to look a little different when it comes to more than 3.6 million TodayTix users, 70 percent of whom are millennials. In addition to entering daily lotteries for discounted tickets like Gause, users can search for tickets to shows held at more than 700 theaters in 11 different cities. By putting so many shows on one platform with an easy checkout process, TodayTix hopes to make theater more approachable and affordable for diverse audiences, especially younger people who may not go to the theater as often.

“We built an app that could be used by anyone,” said Brian Fenty, co-founder and CEO of TodayTix. “To answer your question very honestly, we had millennials in mind and we market to millennials but we really wanted it to be easy for all audiences.”

The push to build a diverse audience and create a new generation of theatergoers is also why some theaters partner with TodayTix, which collects data on its users and shares it with the theaters.

“We have some theaters who say: ‘Look, our number one goal is not ticket price. It’s not sell through. It’s actually the percent of diverse audiences.’ And that’s great when that happens because then we can really give them data that they need to satisfy their goals,” said Fenty.

When the theaters and TodayTix compare databases, they found that over 90 percent of users who bought tickets through the app did not exist in the theaters’ database beforehand.

“In theory, 90 percent of the audiences that we’re bringing or more are really new to that theater, which is pretty exciting,” explained Fenty.

What’s more, many of these customers come back. Between 60 to 63 percent of the apps transactions are from repeat customers.

“Our average customer is 29,” pointed out Fenty. “So what it basically says is that we have these young people who might not have even ever seen theater before. And they keep coming back again and again and again and making up a majority of our sales.”

So far TodayTix has raised nearly $16 million in venture capital funding and expanded from New York to cities like Chicago and Los Angeles, where the app currently holds weekly scavenger hunts for tickets to the musical “Hamilton.” The hunt is solely a TodayTix event and is not a partnership with the “Hamilton” production. (We tagged along on one of those hunts, and you can hear how it went in the audio player above.) While the app sells somewhere between 5 to 6 percent of all tickets on Broadway and its ticket concierges in red T-shirt uniforms have become an expected part of Broadway’s scenery, it has yet to become profitable.

“TodayTix’s hasn’t turned a profit yet because we keep investing in our experience in our products,” said Fenty. Like with other companies, its main revenue stream is the fees that the company charges in addition to the ticket price. “What we’ve always tried to do is charge a fair fee. We’re not the lowest but we’re not the most expensive fee.”

TodayTix is not the only company thinking of how to reach a new generation of theater lovers with a smart phone. Back in August, the wildly popular musical, “Hamilton,” emailed some of its fans letting them know that it launched its very own mobile app. In addition to providing fans with fun updates and photo filters, it also enabled them to enter into its own digital lottery.

In August, fans who asked to be notified when new batches of Hamilton tickets were available received an email with the subject line: “A Note From Lin” informing them that the musical was releasing its very own app.

Screenshot of the email.

“We are constantly exploring ways to allow more people to experience ‘Hamilton’ in its many forms,” said Jeffrey Seller, the show’s producer. “This mobile app is designed to do just that — provide exciting new ways for fans to interact with and gain access to the musical they love.”

In its first month, the app was downloaded one million times, according to Michael Karns, CEO of Marathon Live Entertainment who oversaw the development of the Hamilton App.

The show had a lottery before and the cost has always been $10 a ticket (a Ham for Ham), pointed out Karns. “But we hope that with the rollout of the app we make entering even easier, attracting a younger, more diverse audience in the process.”

TodayTix hopes that ultimately its efforts will change the way the younger generation sees theater. Fenty said that this would mean that going to see a play or a musical will soon become one of these every-day experiences — like going out to a movie or ordering in a pizza and watching your favorite TV show.

“I try to have my team think very ambitiously about our competitors as being Hulu, Netflix, Disney — big large media businesses — and saying ‘Yes they’re competitors but they’re also inspirations to us.’ Ten years ago nobody thought TV was better than movies and now you look at the Emmy Awards and you say wow. Television has become really a golden age and we want to do the same for theater. We want to make sure that theater feels like a relevant accessible easy experience.”

Dan and Helen, new to the TodayTix app, won the lottery on their first try.

To some extent, the plan is already working.

The same day that Gause won her discounted tickets, so did another couple: Dan and Helen. About ten minutes before the show started, the two picked up their set of tickets. When asked if they had a second to chat, Dan glanced at the watch and said: “OK, but make it fast.” They didn’t want to miss the curtain.

The couple had downloaded the app earlier that day and entered in the lottery. Initially, they didn’t win, but another winner didn’t claim their tickets and so Dan and Helen got the call.

“We wanted to see a show for cheap,” said Dan, the lucky first-time user. And see it they did. On time, too.