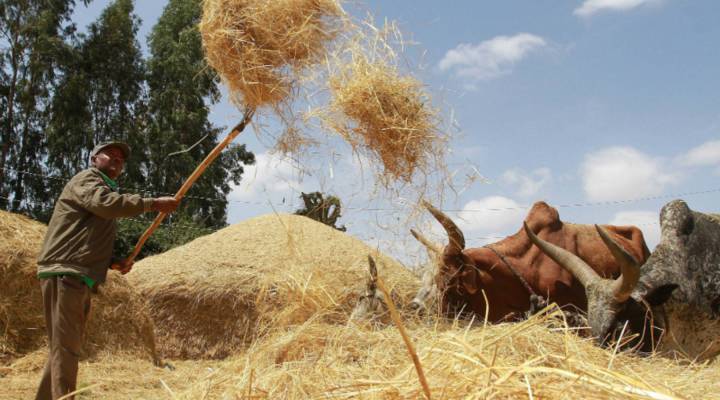 COPY
A farmer winnows a dried teff crop to separate seeds from stalks at a village in Ethiopia. SOLAN GEMECHU/AFP/Getty Images

A farmer winnows a dried teff crop to separate seeds from stalks at a village in Ethiopia. SOLAN GEMECHU/AFP/Getty Images
Listen Now

The International Monetary Fund is out with a new warning to countries in sub-Saharan Africa.  After years of commodity-fueled growth, the IMF said growth in the region has slowed to its lowest in 15 years. The agency said countries need a policy reset if they want to ride out the slump.

Growth in the region was only about 3.5 percent last year, and will probably be only 3 percent this year. Robert Tashima, managing editor for Africa at the Oxford Business Group, said there are several factors feeding into the slower growth.

“Chief among them [are] the slowdown in the Chinese economy, the strengthening U.S. dollar, and the drop in commodity prices across the board,” said Tashima. “But there have been similar hits for things like agricultural commodities and mineral commodities as well, and that’s led to a general worsening in headline indicators for a lot of these markets.”

West African energy producers like Nigeria and Angola are taking a hit from low oil prices, and East African agricultural exporters like Ethiopia, Malawi and Zimbabwe are struggling with drought.

Three percent growth may not seem so bad, but it’s a far cry from the 6 to 7 percent growth the region enjoyed over the last decade. Yvonne Mhango, the sub-Saharan Africa economist for Renaissance Capital, said the region requires a higher rate of growth than some others.

“African countries are developing countries,” she said, “and they need to grow a lot faster than emerging markets, and even more so than the developed world in order to create jobs or at least increase per capita income.” Especially, she said, in order to keep providing jobs for the regions large population of young people.

Another factor slowing growth is tougher requirements for global financing. The IMF said “external financing conditions for most of the region’s frontier markets have tightened substantially, compared to the period until mid-2014 when they enjoyed wide access to global capital markets.” That makes it difficult to fund new projects and governments whose revenues now come up short.