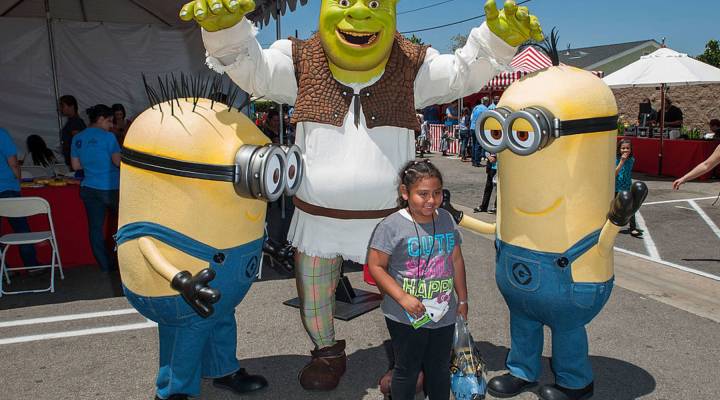 COPY
Comcast announced Thursday it will pay $3.55 billion for DreamWorks Animation, bringing movies like Shrek and Minions under one roof. Photo by Valerie Macon/Getty Images

Comcast announced Thursday it will pay $3.55 billion for DreamWorks Animation, bringing movies like Shrek and Minions under one roof. Photo by Valerie Macon/Getty Images
Listen Now

To listen to Marketplace’s Adriene Hill and Variety’s Cynthia Littleton talk more about what this deal means for Comcast and movie goers, click on the audio player at the top of the page.

Comcast confirmed Thursday its interest in DreamWorks Animation, announcing it will pay more than $3 billion for the film company. Wall Street responded favorably.

Comcast shares rose 58 cents to $61.88 in morning trading, while shares of DreamWorks Animation leapt $7.80, or 24.2 percent, to $40. As part of the deal, DreamWorks stockholders will receive $41 for each share they own. That’s a 24 percent premium to the company’s Wednesday closing price of $32.20. The companies put the deal’s value at about $3.8 billion.

The news comes after news reports Wednesday said the deal was in the works. DreamWorks, responsible for popular animated movie franchises such as Shrek, Madagascar and Kung Fu Panda, has tried to find a buyer for years due to competition in the animated film genre; think Pixar and the Comcast-owned Universal Pictures, which found success with movies like “Despicable Me” and “Minions.” This move will help Comcast further build out its growing media empire, and expand its children’s entertainment programming.

DreamWorks will become part of the Universal Filmed Entertainment Group, which Comcast owns under NBCUniversal. Comcast said the deal gives it a “broader reach to a host of new audiences in the highly competitive kids and family entertainment space, in both TV and film.” In addition to the cartoon franchises, DreamWorks also owns what Comcast called a “thriving TV operation” with an extensive trove of family programming.

Once the deal closes, DreamWorks co-founder and CEO Jeffrey Katzenberg will become chairman of DreamWorks New Media. He’ll also serve as a consultant to NBCUniversal, a unit of Comcast Corp. The boards of both Comcast and DreamWorks have approved the transaction, which is targeted to close by year’s end.

The animation industry has grown consistently in recent years, thanks to an increased demand for animation in video games, movies and television, according to the U.S. Department of Labor’s Bureau of Labor Statistics. Multimedia artists and animator employment was expected to grow by 6 percent from 2014 to 2024. This growth is spurred, in part, by popular films like “Despicable Me.” Marketplace’s Kai Ryssdal spoke with Chris Meledandri, the man responsible for Minions mania, earlier this year about this golden age of animation. Check out their conversation by clicking on the player below.