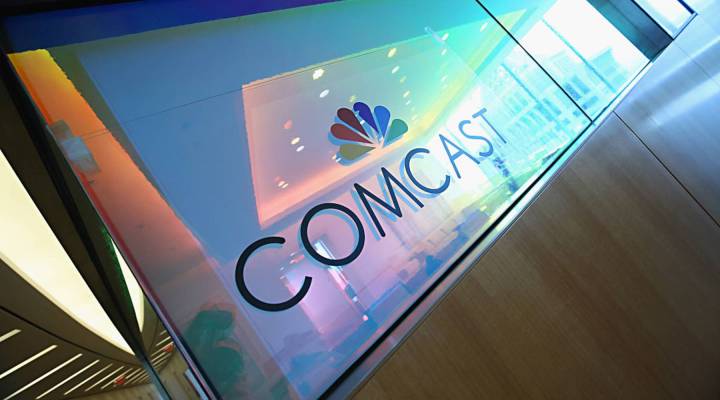 COPY
A view of the Comcast offices in Philadelphia, Pennsylvania. Cindy Ord/Getty Images for Comcast

A view of the Comcast offices in Philadelphia, Pennsylvania. Cindy Ord/Getty Images for Comcast
Listen Now

The Wall Street Journal reported on Wednesday that Comcast is in talks to buy DreamWorks Animation SKG, though neither company would confirm the talks with Marketplace.

Comcast reported better than expected earnings Wednesday, adding customers and profits, despite the cord-cutters. The rumored attempt to buy DreamWorks isn’t new territory for the media conglomerate, according to David Miller, who follows the media and entertainment sectors for Topeka Capital Markets.

“They own NBC Universal,” said Miller, “they own the NBC broadcast network. They own a suite of cable networks like USA, Syfy, all the Bravo networks. And of course they’re involved with the theme parks business.”

The next step is owning the content that’s on those channels and marketed in those parks. Ali Yurukoglu teaches economics at Stanford University.

“Most of the content they deliver to consumers isn’t produced by themselves, it’s produced by suppliers,” said Yurukoglu. “But, recently, they’ve been getting into integrating into that content production sector.”

“One of the biggest costs for cable companies is actually the content that they pay, and this gives them a little bit of a hedge on that cost that’s been rising every year,” he said.

Plus, when Comcast owns a franchise– say Universal’s “Despicable Me”, the company gets to keep all the associated revenue in-house.

“Everything that a content company would own—all the licensing, merchandizing, syndication and so forth, they would control all of that as well,” said Louthan.

So the idea of adding to that catalog of content by acquiring companies like DreamWorks can look pretty appealing.