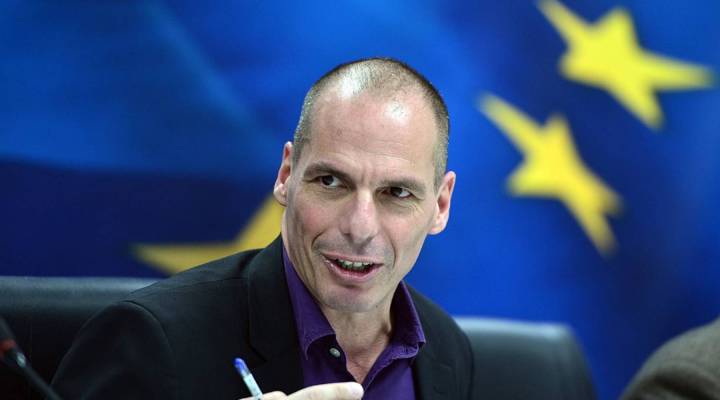 COPY
Greek Finance Minister Yanis Varoufakis presents his ministry's new secretaries at a press conference in Athens on March 4, 2015. Strapped for cash and under pressure to deliver on reforms, Greece's new radical government has ruffled feathers in Brussels by not respecting the diplomatic niceties of the negotiating table. LOUISA GOULIAMAKI/AFP/Getty Images
Shelf Life

Greek Finance Minister Yanis Varoufakis presents his ministry's new secretaries at a press conference in Athens on March 4, 2015. Strapped for cash and under pressure to deliver on reforms, Greece's new radical government has ruffled feathers in Brussels by not respecting the diplomatic niceties of the negotiating table. LOUISA GOULIAMAKI/AFP/Getty Images
Listen Now

Last summer, Marketplace went to Athens, Greece to talk to people about what was, at that point, supposed to be the end of the Greek debt crisis. What culminated was an European bailout, reforms by the Greek government and some painful changes, but at least things were supposed to be settled.

But the Greek debt crisis is still with us and Europe is still having problems with its economic integration.

Perhaps the highest profile figure of that period last year was then Greek finance minister, Yanis Varoufakis. He made no friends among his European Union counterparts and didn’t seem especially troubled by it.

Varoufakis’ new book is called “And the Weak Suffer What They Must?: Europe’s Crisis and America’s Economic Future.” He spoke with Kai Ryssdal about the state of Europe’s economy.

Yanis Varoufakis: …My intention is to do whatever it takes to arrest the slide of Europe into a new abyss that is very reminiscent of the 1930s, an abyss that would make the life of Europeans very difficult and would inflict substantial damage upon the rest of the global economy.

I’m going to give you a very radical answer. The answer is no. Nothing of substance has changed. We carry on extending the crisis into the future by pretending we’ve solved it. And Greece should not be — or would not be — something that you and I would be talking about in California, in New York State, anywhere else in the world. It shouldn’t matter that much. The only reason why it matters is because it reflects the wholesale denial of the European Union concerning the unsustainability of the institutions it has created.

Why not advocate for a Greek exit from the Eurozone?

For the very simple reason that it’s one thing to say we should not have gotten into this mess, into this monetary union, and it’s quite another to say we should get out. When you leave, you don’t go back to where you would have been had you not entered, you fall off a cliff. Or, to put it more succinctly, it’s the Eagles’ doctrine, the “Hotel California” doctrine: you can check out anytime you like, but you can never leave.

What is the answer then to the European dilemma?

We have to fix the European Union. And we can do it, technically, we can do it in a few short weeks… There is no difficulty in stabilizing the European economy, it’s not a lack of money… The difficulty is getting our leaders together, resolving their coordination failure problem, and having the political will to do it.

Where does the blame lie for Europe’s economic woes?

To all of them. To all political leaders. I never indulge in biblical economics, in moralizing, in pointing fingers and saying “It’s the Germans’ fault, it’s the French’s fault.” All of them are in it together. Every single one of them. The Greek Prime Minister, the French President, the Portuguese Prime Minister — they all have the moral duty to get together and actually do what is possible and which is absolutely essential to arrest this decline.