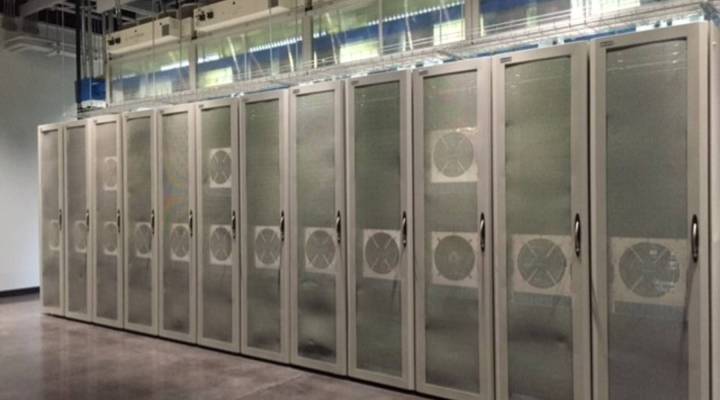 COPY
Aligned Energy developed a cooling system called “conductive cooling.” In this process, a heat sink removes heat directly at the rack or aisle, drawing hot air from servers and passing it across coils chilled by refrigerant. Cool air comes out the other side.  Lauren Silverman/KERA

Aligned Energy developed a cooling system called “conductive cooling.” In this process, a heat sink removes heat directly at the rack or aisle, drawing hot air from servers and passing it across coils chilled by refrigerant. Cool air comes out the other side.  Lauren Silverman/KERA
Listen Now

If Memory Lane were a real place, it might be a long aisle in a dimly-lit data center. At least for those of us who keep photos online.

“When Facebook came out years ago, you loaded pictures and put them in an album that today you still want to be able to access,” Ali Greenwood, with Jones Lang LaSalle, a real estate firm in Dallas, said. “Do you ever look at them? Very rarely, right! But you would be devastated if you couldn’t click on it and pull up a photo album of your wedding from seven years ago.”

Greenwood, Vice President of JLL’s Data Center Solutions Group, says that all of that digital data — things like selfies and birthday messages — have been living inside data centers. Far from being the quiet, clean “cloud” we hear about, these places are often old-school — noisy, cold warehouses with roaring, outdated cooling systems.

Google’s two computing centers are seen from the air in Oregon. Now, Apple will also have its own data centers in the state, which offers cheap land and electricity.

“We know they use about 90 billion kilowatt hours of power a year,” Delforge said. “That’s equivalent to the output of more than 30 large coal-fired power plants.”

Last month, the U.S. House of Representatives passed a bill to make federal data centers use energy more efficiently – it could save taxpayers $5 billion over seven years, according to a report from the Center for Climate and Energy Solutions.

Delforge believes there are a few big opportunities for energy savings at data centers. So-called “zombie servers”, which are minimally used, could be shut down, and average server utilization could be increased. Delforge said it currently runs very low, somewhere around 10 to 20 percent. “This is akin to running a fleet of airplanes with only 10 percent of seats filled.” he said.

Small and medium data centers could be moved to large-scale cloud data centers which are much more energy efficient. And cooling techniques could be improved. Which is where the newest data center in Plano, Texas comes in.

During a recent tour, Tom Doherty showed off Aligned Energy’s Data Center, where a different approach to keeping data cool is being tried out. The massive campus will soon be filled with rows of servers. Instead of using expensive fan energy to blow cold air around, they’re using an idea borrowed from the iPhone. It’s called heat removal.

“The idea is, if we can efficiently remove heat from the data center, you could substantially improve the efficiency,” Doherty said, chief operating officer of Aligned Data Centers.

Like smartphones use an aluminum body to radiate away wasted heat, at this data center, heat-sinks directly above the servers draw away hot air and pass it across coils chilled by refrigerant.

Ali Greenwood said in the race to trim power usage, companies in Texas are testing out all kinds of cooling ideas. From evaporative cooling to chimney ducts that push heat server exhaust into the ceiling, to dunking servers in a cooling fluid like mineral oil.

On top of using new cooling techniques, corporations are also feeling pressure to use renewable sources of energy, like wind or solar.

Bill Weihl is Facebook’s director of sustainability — he’s also known as the sustainability guru. He says the one billion dollar data center being built in Fort Worth will run on 100 percent wind energy. Easy access to wind is one of the reasons Texas was selected as the fifth site for a data center, Weihl says.

“It wouldn’t surprise me if in Texas, many other data center companies in the next couple of years started to do that as well,” he said.

Right now in Texas, it’s cheaper to get power from traditional sources, so smaller data centers will probably focus on energy efficiency before switching to renewables.

That means when you are on your phone, digging for data — things like old pictures or notes – there will still be some pollution on your trip down Memory Lane.