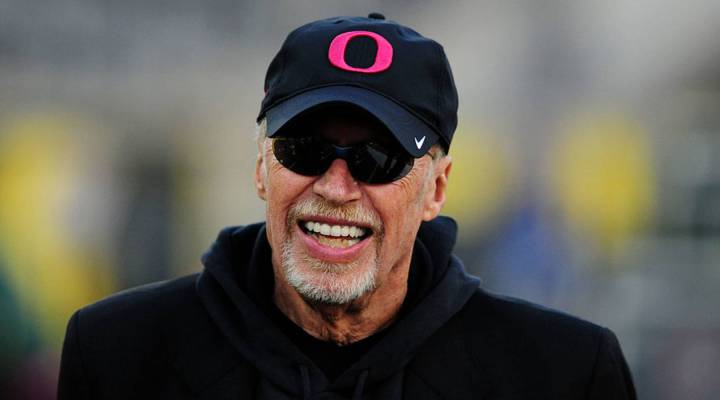 Listen to our full interview with Phil Knight by clicking here or subscribing to the podcast. Just want the highlights? Check ’em out here.

Phil Knight has held many jobs in his life. He was in the Army Reserves, he was a professor of accounting and a CPA.

But his biggest accomplishment might be what millions of people around the world put on their feet. The company he started with his running coach, Bill Bowerman, out of the back of his car in 1964, had a couple of other names. In the beginning Knight was a distributor for Japanese brand Onitsuka Tiger. The company was also called Blue Ribbon at one point.

Now, it’s the $30 billion dollar company known around the world as Nike.

Knight’s new memoir is called “Shoe Dog,” which he said means, simply, shoemaker. He talked about his career with Marketplace host Kai Ryssdal.

On how he commissioned the iconic Nike swoosh:

When we changed from Tiger to Nike, we had to have a design for the shoe. And where do you go to? There’s no ‘dial 9-1-1’ for design. So I basically introduced myself to a graphic arts student at Portland State when I was teaching there. […] She was paid $2 an hour – which seemed to be the going rate for a struggling art student at Portland State – which amounted to $35 at the time. When we went public, we gave her 500 shares of stock which she has held onto to this day. It’s worth about a million dollars.

On how the sport of running influenced him:

Y’know, in basketball, it’s about the ball itself. In running, the only equipment that really matters – at least the mentality was in those days – were the pair of shoes that you wore. The coach that I had thought announcing a pair of shoes was worth 10,000 pounds and the last 10 yards of a mile. So the importance of shoes was drummed into me for many years.

On what he thinks of his accomplishments with Nike:

I think a businessman can be an artist just as much as a writer or a sculptor, so I’m real proud of what the company has become… I still get a thrill at looking at people’s feet and seeing it in unexpected places. I know when the Berlin wall went down and I walked into what was East Berlin and saw two big Nike banners – that gave me a chill.