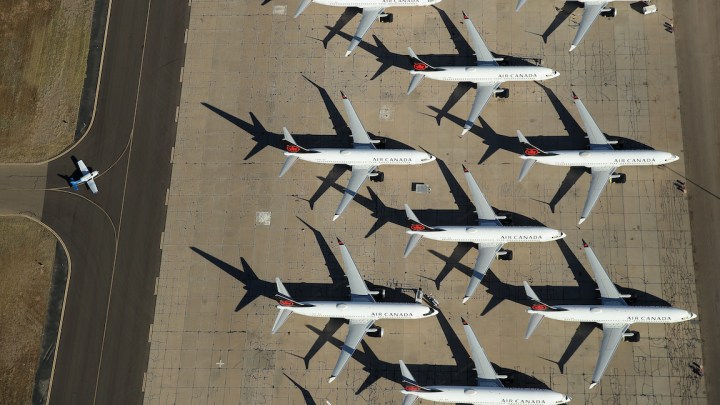 Between Phoenix and Tucson along Interstate 10 is a long stretch of glistening aluminum. What seems like a metal mirage in the middle of the Sonoran Desert is actually row after row of commercial jets stored at the Pinal Airpark.

Jim Petty is the airpark’s director. He said before the pandemic there were about 89 planes on site. But last year that number jumped to over 400.

“Most of it has to do with the virus,” Petty said.

While travel, tourism and airlines have struggled, Petty’s once-small airport has thrived as the industry had to cool its jets. “It really is a hard thing to say, because it hurts, but yeah it’s helped out the airpark quite a bit,” he said.

The cost of jet storage can range from a few hundred dollars a month to the five figures, including services and upkeep. And as it turns out, the desert of the southwestern United States makes for the perfect long-term parking lot.

The desert helps preserve the aircraft’s internal systems and protects the metallic surfaces from corrosive environments.

Business has also been good for Querio.

“We do heavy maintenance, modifications, storage, paint, reclamation. It’s been a very robust year with the effect of COVID-19,” he said.

At the height of the pandemic, global air travel was down as much as 90%.

But Petty said that’s beginning to change as many of the jets have started moving off lots at his Pinal Airpark.

“I think this is going to be a very good indicator of hopeful future need in the aviation industry for flights,” he said.

Even when airlines are ready to move planes out of storage, there may be another issue to deal with: Finding people that know how to fly them. And now Petty said the industry is anticipating a possible shortage of pilots to get all those jets airborne again.