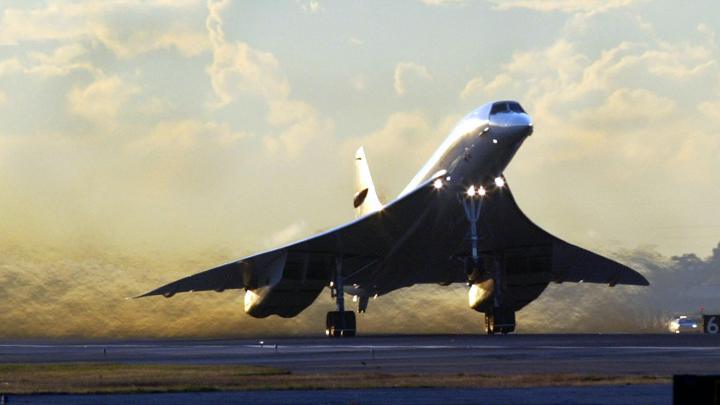 COPY
The final British Airways Concorde flight lifts off from John F. Kennedy Airport in New York on its final voyage to London in 2003. Timothy A. Clary/AFP via Getty Images

The final British Airways Concorde flight lifts off from John F. Kennedy Airport in New York on its final voyage to London in 2003. Timothy A. Clary/AFP via Getty Images
Listen Now

United Airlines said today it’s going supersonic. The airline has agreed to purchase 15 faster-than-the-speed-of-sound jets from aerospace startup Boom Supersonic (jets which do not yet exist).

But United and Boom say the ultrafast planes could be carrying passengers by the end of 2029. The jet United has agreed to buy is called the Overture. The obvious comparison here is the Concorde, which –– even with $20,000 tickets –– was a business failure and stopped flying in 2003.

‘The most important lesson of the Concorde is you need government to pay the entire upfront expense, and even with all of that, it still couldn’t make money. That’s as instructive as it gets about the realities of supersonic economics,” said Richard Aboulafia, aviation analyst with Teal Group.

The idea that supersonic flight would make a comeback? “This is theater,” said Aboulafia, “Nothing more.”

One firm did early feasibility studies with Boom Supersonic, Boyd Group International. Michael Boyd, president, said a lot has changed since the Concorde. “Let me go down the list. ‘Ozzie and Harriet’ is off TV, we don’t buy hula hoops anymore, we don’t have black and white TVs anymore. The Concorde rolled out of the hangar 54 years ago,” he said, adding that the Overture, by contrast, would be based on modern technology and be carbon neutral.

“We have carbon fiber composites, we have software-optimized aerodynamics, we have new engines that are more efficient and quieter,” said Blake Scholl, CEO of Boom Supersonic. Scholl said the Overture’s operating costs will be 75% lower than the Concorde’s. United’s order is the first true civilian order for supersonic planes since the 1970s, he said, and the airline put down what he called a “meaningful” deposit.

“You can make the economics work with the business class fares that you see today, and certainly the goal is to bring it to a broad swath of our customers over time,” said Mike Leskinen, vice president of corporate development at United.

Boom rolled out a prototype last year called the XB1, which Scholl said will be in the skies by early next year. He said the Overture itself could be in test flights by 2026.

Are we on the verge of supersonic travel again?