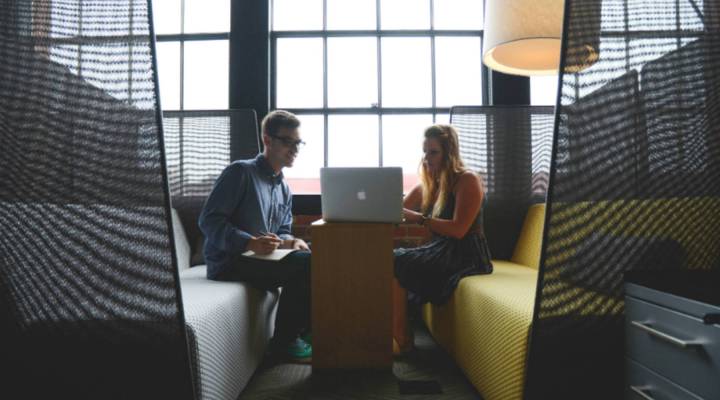 COPY
Some women may not know that they're being paid less than the man sitting next to them. Startup Stock Photos

Some women may not know that they're being paid less than the man sitting next to them. Startup Stock Photos
Listen Now

Women are typically paid 79 percent of what men make, but they may not know what’s happening in their own workplace.

A new international survey from the jobs and recruiting website Glassdoor says men are more likely than women to say they understand how pay is set at their workplace. Glassdoor says majorities of men and women said they wished they had a better understanding of what fair pay is for their job.

Pay transparency is especially important for women, who may not realize they’re paid less than the man sitting next to them. And what happens when they do find out?

She found out she was being paid less than an equally qualified male colleague at the University of Massachusetts.

Duchon was able to look up the salaries of her co-workers because they’re state employees and their salaries are public. Duchon complained to her boss.  Who told her…

“’This is how the world works,’ and that she had had this experience of being underpaid in her work environment,” Duchon said.

Yep. Duchon’s boss was a woman.  It took seven years, but eventually Duchon got an equity review.  Now she’s paid the same as that male colleague. But she said it would have been an even harder fight if she hadn’t known his salary.

“Seeing it in black and white is so much more difficult to challenge,” she said.

But the survey found 65 percent of U.S. men thought they had a good understanding of how pay is determined, versus just 53 percent of women. Men were also more likely to say their employer shares pay information.

“There’s a clear theme,” said Scott Dobroski, Glassdoor’s career trends analyst. He said it’s not clear why more men think they’re in the loop on pay. “Do men just have a perception that they do understand pay better than women, or are women actually more realistic and perhaps men are being overly confident but not accurate?” he wondered.

The survey also found that U.S. men are more likely than women to say they’d anonymously share salary information, even though that information can help women. Especially in court.

“Sunshine does a lot to disinfect,” said Katherine Kimpel, an attorney specializing in gender discrimination lawsuits. “The only reason corporations are able to get away with underpaying their female employees is because they’re able to do it in secret.”