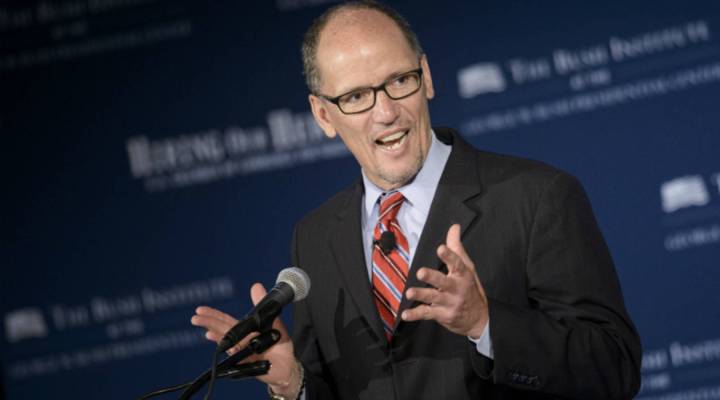 U.S. Secretary of Labor Thomas Perez is trying to improve living conditions for the American people.

The U.S. Department of Labor released new rules this week to encourage financial advisers, especially stock brokers working on commission, to put the client’s interest first when it comes to retirement money. And when it comes to the job market, Perez wants companies to put their employees’ interests first.

Secretary Perez joined Marketplace Morning Report host David Brancaccio to discuss the new plan for financial advisers, along with why raising the minimum wage is essential for workers.

On the Labor Department’s new rules for financial advisers:

Perez: We’re trying to make sure that financial advisers act like lawyers and doctors. When you go to a lawyer or  doctor, they have an obligation to put your best interests first. Financial advisers don’t. And what we did the other day, quite simply, was take the marketing materials of so many of the companies that say, “We put our client first,” and we said, “It’s a great slogan; it’s now the law.” … A lot of people don’t trust the advisers. They have reason not to trust them, because the system was structurally flawed. And we are correcting that misalignment. And I am confident that what we have done in this rule is going to enhance trust. And therefore more people, when they are empowered, will then seek access.

On extending overtime pay to workers who make more than the minimum wage:

Perez: The overtime rule was frankly diluted in 2004 by a regulation put in place by the Bush administration. When you work extra, you should be paid extra. That’s what the Fair Labor Standards Act said. And I’ve met so many people who are working 60-70 hours a week and they are effectively working 20 hours for free because they are making a little bit above the minimum wage, because the 2004 regulation enables employers to do that. That’s not fair. The president said to fix it and we’re going to fix it.

On whether raising the minimum wage will increase prices:

Perez: If the price of a burger goes up 5 cents and the minimum wage that you have received is going up from $7.25 to $15 an hour – and there have been a number of studies that document just how much the price of a burger might go up if you increase the minimum wage. You match the costs, and the benefits far outweigh the costs… You look at places like Shake Shack – and don’t tell my wife I go there, and don’t tell the First Lady – but I’ll tell you Shake Shack is one of the most successful IPOs over the last couple years. And they have demonstrated that you can run a burger business in which you sell a great product and you treat your workers well. And I spoke to the founder of Shake Shack and he told me that the key to their success was that they paid well above the minimum wage. Because what that did is it produced a loyal and productive workforce and less attrition. That’s what it’s about.