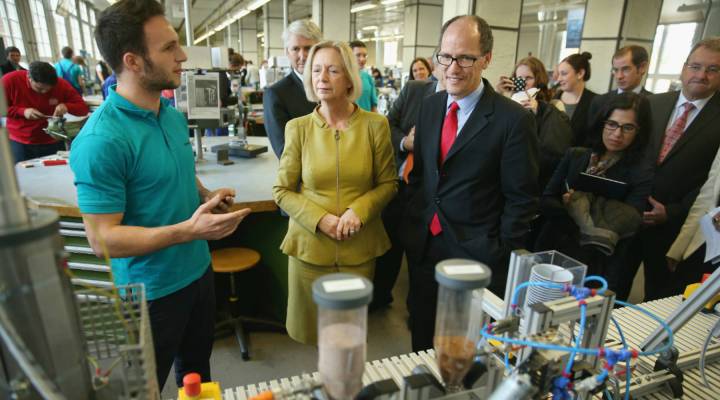 But not every sector experienced growth: The manufacturing industry lost 14,000 jobs last month. Labor Secretary Thomas Perez spoke to us about this decline, along with the country’s new overtime rules that will allow employees making up to $47,476 eligible for overtime pay.

On why manufacturing experienced a loss:

Well, manufacturing is always an important sector…countries around the world aren’t doing as well as we are. They’re not buying as much. And when you have a strong dollar, coupled with a global economic downturn, that spells a challenge. What is important, though, when we look at the aggregate numbers here, is we’ve had a pretty darn good summer. We had two excellent months in June and July, followed by a solid month in August. And what you tend to see at this point in an economic recovery is that the pace of job growth slows a bit, and then the pace of wage growth ticks up. And we’re seeing exactly that.

On small businesses that may be unhappy with the new overtime rules:

During the course of our outreach, we spoke to a lot of small business owners who understood that their most precious cargo is their workers. And when you’re paying somebody $24,000 and they’re working 60 hours a week, they’re in effect working 20 hours for free and that’s not fair. And a result of a very conscious decision that the Bush administration made in 2004, when they changed the rules to calculate who is eligible for overtime, what they did was they took all the leverage away from workers and gave it to businesses. So that you could create a situation where a person is considered a “manager,” spends 99 percent of his or her time stocking shelves, doing nothing that you would call management, [and] 1 percent of the time doing something you might call management, and they’re an exempt employee. And that’s inconsistent with both the letter and spirit of the Fair Labor Standards Act.