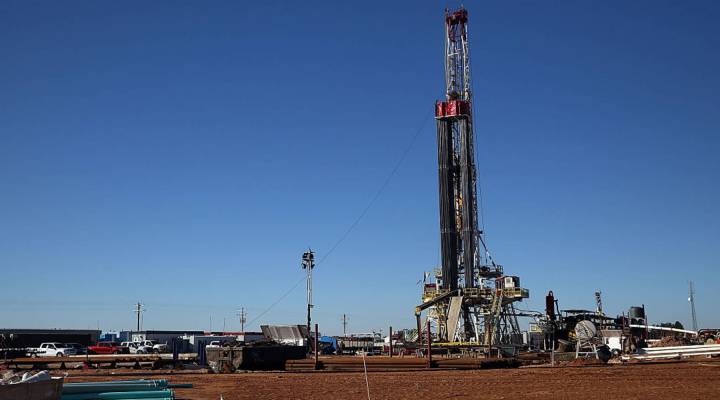 COPY
A fracking site is situated on the outskirts of town in the Permian Basin oil field on January 21, 2016 in the oil town of Midland, Texas.  Spencer Platt/Getty Images

A fracking site is situated on the outskirts of town in the Permian Basin oil field on January 21, 2016 in the oil town of Midland, Texas.  Spencer Platt/Getty Images
Listen Now

The potential upsides and downsides of fracking technology for oil and gas keep coming.

The Energy Department found half of all U.S. continental oil production now comes from fracking, bringing enhanced energy self-sufficiency. But injecting wastewater from fracking underground has boosted the risk of earthquakes in parts of Oklahoma and Kansas to the same level as California, according to the U.S. Geology Survey.

Now, a new study focuses on alleged contamination of drinking water in one of the highest-profile, longstanding cases. The location is the small town of Pavillion, Wyoming, population 231.

In 2004, Pavillion resident Louis Meeks said the company Encana drilled for natural gas by his house. And his water changed.

“In our toilets and stuff, we get a yellowish brown stain in there, which never happened til they drilled this well up here,” Meeks said. “A lot of times you get in and take a shower and that fine mist will just clear your sinuses.”

Meeks and his wife decided to sell their sheep. “We were losing lambs because of this water,” he said. “Cows, too. And then our chickens. We have to give them bottled water, or they die.”

Controversy has long surrounded Pavillion. The Environmental Protection Agency found that fracking “likely” impacted groundwater in a draft 2011 study, but then discontinued it and handed the study over to the state of Wyoming. The state last December found contamination “unlikely.”

This new academic study analyzes all public data on the case, including monitoring wells of the drinking water aquifer.

“We found salts, potassium and chloride that do occur naturally but were much higher than found naturally,” said co-author Rob Jackson, an earth system scientist at Stanford University. “We found things like methanol in the water. There was benzene in the water 50 times higher than the allowable levels for drinking water.”

The paper concluded fracking had a “clear impact” on drinking water. To Jackson, it also highlights a broader risk: a significant portion of fracking occurs, as it does in Pavillion, at shallow depths, in close proximity to drinking water sources.

“There is no buffer,” Jackson said. “The hydraulic fractures open up into the rock. When you’re so close, things can migrate into natural cracks and fissures.”

The study suggests an additional source of groundwater contamination “impact” in Pavillion: historic pits storing fracking wastewater that were unlined.

One important nuance: the study found fracking chemicals in the groundwater source for household water wells in Pavillion. As for contamination of the actual water wells, the authors found levels concerning, but finding a definitive link requires “further investigation including installation of monitoring wells om the Wind River Formation,” according to the paper.

For its part, Encana responded to the study with an emailed statement: “There is no evidence that the water quality in domestic wells in the Pavillion Field has changed as a result of oil and gas operations; no oil and gas constituents were found to exceed drinking water standards in any samples taken.”

A spokesman for the state of Wyoming’s Department of Environmental Quality told Marketplace the department is busy assessing public comments on its own Pavillion analysis. “We won’t have a response to” the Stanford paper, the spokesman said.

On the issue of drilling well integrity, the study found about half the natural gas wells analyzed contained no protective cement below an initial depth. Cementing is designed to protect against fluids or chemicals traveling up the pipe exterior.

“There is no primary cement below surface casing, often for hundreds of meters, for 55 of 106 (52 percent) production wells for which cement bond logs are available,” the paper states.

“They weren’t completed how they were supposed to be,” said Sue Spencer, a hydrogeologist working for Weston Groundwater Engineering in Laramie. “But nobody ever made them go back and fix it, either. Which is weird, because everybody knows that that’s a really important thing to do, by the oil industry standards.”

For its part, the EPA four years ago abandoned its study of Pavillion and handed it over to Wyoming state regulators. At the time, industry representatives criticized the EPA’s data analysis and procedures. Robert Sussman, senior policy counsel at the EPA at the time, told the Casper Star Tribune in December that the agency was on a “collision course” with Encana and Wyoming at the time of its withdrawal.

“There were just serious issues, technical issues about the study,” Sussman told the newspaper. “We could spend the next couple of years fighting about the study. Maybe we would win, maybe we would not. We figured staying in this confrontational mode was not going to produce any solutions.”

Privately, scientists inside and outside the agency attribute two reasons for the retreat: data collection issues, and political pressure from the White House. The Pavillion withdrawal decision came during the 2012 election campaign, during which President Obama promoted oil and natural production as part of a proposed all-of-the-above energy policy.

Around the same time, the EPA abandoned investigations of alleged fracking contamination in two other cases — in Parker County, Texas, and Dimock, Pennsylvania.

Separately, the agency has been conducting a national study on the fracking process and risks to drinking water. The study excludes all three high-profile cases in Pavillion, Parker County and Dimock.

“It’s so surprising to me that a national multi-year EPA report would almost not mention the most high-profile cases that the EPA was involved with,” Jackson said. “It makes no sense.”

The draft assessment found “specific instances where one or more mechanisms led to impacts on drinking water resources.” A separate EPA “summary of impacts” document provided to Marketplace lists 31 impacts, from blowouts to well failure to frac fluid spills.

Agency scientists in a separate document estimated 600 wells in the country (based on projections) were uncemented below the surface-level casing, based on 2009 and 2010 industry data.

The topline finding of no “widespread systemic impact” is now being questioned by an outside science advisory board (SAB) panel peer-reviewing the EPA draft.

In a draft report to the EPA, the advisory board states: “The SAB finds that this statement does not clearly describe the system(s) of interest (e.g., groundwater, surface water) nor the definitions of ‘systemic’ and ‘widespread.’ The SAB agrees that the statement has been interpreted by members of the public in many different ways, and concludes that the statement requires clarification and additional explanation.”