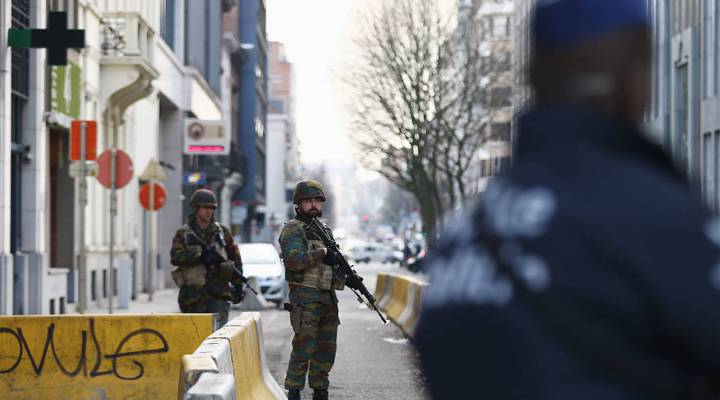 Soldiers and police officers stand guard outside EU Commission Headquarters following the attack on March 22, 2016 in Brussels, Belgium. At least 34 people are thought to have been killed after Brussels airport and a Metro station were targeted by explosions. The attacks come just days after a key suspect in the Paris attacks, Salah Abdeslam, was captured in Brussels.  Carl Court/Getty Images

Soldiers and police officers stand guard outside EU Commission Headquarters following the attack on March 22, 2016 in Brussels, Belgium. At least 34 people are thought to have been killed after Brussels airport and a Metro station were targeted by explosions. The attacks come just days after a key suspect in the Paris attacks, Salah Abdeslam, was captured in Brussels.  Carl Court/Getty Images

More than 30 people are believed to have been killed and dozens injured in attacks at Brussels international airport and a city metro station.

The Islamic State (IS) group said it was behind the attacks in a statement issued on the IS-linked Amaq agency.

Belgium has raised its terrorism alert to its highest level. Three days of national mourning have been declared.

Prime Minister Charles Michel called the latest attacks “blind, violent and cowardly”, adding: “This is a day of tragedy, a black day… I would like to call on everyone to show calmness and solidarity”.

The airport and the entire public transport system in Brussels are closed, although some train stations are due to reopen shortly.

The Belgian prosecutor said “probably a suicide bomber” was involved.

The state-owned Belga news agency reports that shots were fired and shouts in Arabic were heard before the two explosions.

Some witnesses said that after the first blast people fled only to get caught in the second blast.

Public broadcaster VRT said an assault rifle was found next to a dead attacker. Private broadcaster VTM added that an unexploded bomb belt had been found. Reports say it will be detonated safely soon.

Zach Mouzoun, arriving on a flight from Geneva, told France’s BFM television: “It was atrocious. The ceilings collapsed. There was blood everywhere, injured people, bags everywhere. We were walking in the debris. It was a war scene.”

All flights have been diverted. Eurostar has cancelled all trains to and from Brussels. The Thalys France-Benelux train operator says the entire network is closed.

“People were running over others that had fallen, I couldn’t breathe. I can’t believe I’m alive,” 15-year-old Antoine told me as he walked with his school friends in a line of hundreds being escorted on foot and by bus to a sports hall, now a makeshift reception centre.

Three hearses passed, heading towards the ruins of the airport departure hall. People sobbed at the sight of them.

Several tourists were asking police what they should do now, where it was safe to go – and when the airport might reopen.

The police were confused too, but offered what little information they had, telling people to head to a reception centre. An officer repeatedly shouted: “Quickly, keep moving, evacuate, this is serious.”

Security has been stepped up at Gatwick and Heathrow airports and the UK Foreign Office has advised British nationals to avoid crowded areas in Belgium.

France has stepped up security, and the cabinet has held an emergency meeting. There is also extra security at Dutch airports.

The metro blast occurred shortly after 08:00 GMT during the rush hour at Maelbeek station.

It struck the middle carriage of a three-carriage train while it was moving away from the platform.

Alexandre Brans told AP: “The metro was leaving Maelbeek station when there was a really loud explosion. It was panic everywhere. There were a lot of people in the metro.”

Brussels Mayor Yvan Mayeur said “about 20” people had died and more than 100 had been injured, 17 of them severely.

The station is close to EU institutions. The European Commission, the EU’s executive arm, has told employees to stay indoors or at home. All meetings at EU institutions have been cancelled.

Ryan McGhee, a catering worker at a college in Brussels, told the BBC: “The entire city is in lockdown. People are calm at the moment but the atmosphere is tense.”

There has been strong international condemnation:

Belgium’s Interior Minister Jan Jambon had said on Monday that the country was on the highest level of alert for possible revenge attacks after the capture of Salah Abdeslam.

He told Belgian radio: “We know that stopping one cell can… push others into action. We are aware of it in this case.”