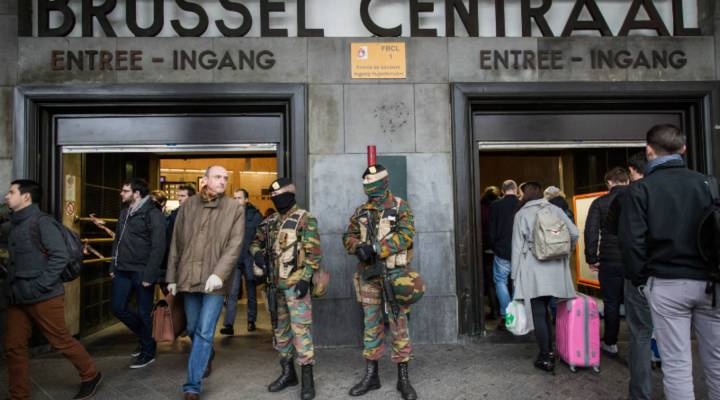 COPY
Soldiers stand guard at the entrance of Brussels' central station on Wednesday, one day after the attacks on Brussels airport and a metro station in the city.  AURORE BELOT/AFP/Getty Images

Soldiers stand guard at the entrance of Brussels' central station on Wednesday, one day after the attacks on Brussels airport and a metro station in the city.  AURORE BELOT/AFP/Getty Images
Listen Now

The terrorist attacks in Brussels are raising questions about how the seat of the European Union’s government is protected.

The metro station that was attacked is close to the European parliament. Brussels is also home to NATO and to major financial transaction firms.

Despite the importance of the city, Belgium — a small country of 11 million — is largely on its own in responding to terror threats and protecting Brussels.

“Belgium has really been overwhelmed in recent years by the number of radicalized people” within its borders, said Robbie Gramer, a security expert specializing in NATO countries at the Atlantic Council.

Each country in Europe has to deal with its own terrorism threats, and Belgium’s police force wasn’t designed for dealing with such a threat, Gramer said.

Belgium’s task is made harder by the fact that European countries each have their own intelligence operations. While there is a central European agency for intelligence, Europol, individual countries don’t consistently share information.

“We need to look more across Europe as a whole to ensure intelligence is being shared between and among the various security services,” said Frank Cilluffo, a former senior U.S. counterterrorism official who is now director of The George Washington University’s Center for Cyber and Homeland Security.

Gramer said there will be increased assistance for Belgium in the wake of this latest attack.