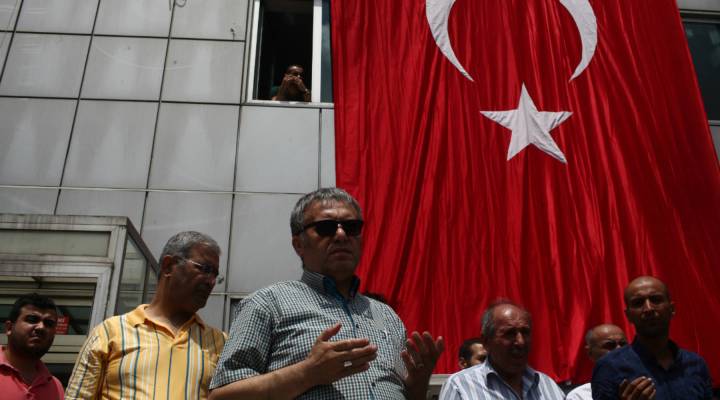 According to our partners at the BBC:

The death toll in a gun and suicide bomb attack on Istanbul’s Ataturk airport has risen to 41, 13 of them foreign nationals, with 239 injured, the Turkish city’s governor says.

Three attackers arrived in a taxi and began firing at the terminal entrance late on Tuesday. They blew themselves up after police fired back.

However, no-one has so far admitted carrying out the attack.

Turkey has declared Wednesday a day of national mourning.

Turkish investigators are examining CCTV footage, witness statements and mobile phone video recorded by terrified passengers to try to determine the identity of the attackers.

The Dogan news agency said autopsies on the three dead men suggested they may be foreign nationals but this has not been confirmed.

Of those, 41 are still in intensive care.

UK Prime Minister David Cameron said there were no reports yet of any British casualties, but the Foreign Office was in contact with Turkish authorities.

Cleaners worked through the morning to sweep up shattered glass, while workers repaired cables and ceiling tiles. Heavily-armed security personnel were patrolling the airport.

Flights had resumed in the early morning, though with many cancellations and delays.

Turkish President Recep Tayyip Erdogan said the attack should serve as a turning point in the global fight against militant groups.

Footage on social media shows one moving through the building as people around him flee. He is shot by police and remains on the ground for about 20 seconds before blowing himself up. All three attackers were killed.

The lack of any immediate claim for this attack by so-called Islamic State is not surprising. IS rarely, if ever, claims responsibility for attacks against the Turkish state yet it is quick to advertise its assassinations of Syrian activists inside Turkey.

All the signs point towards IS being the culprits. This is what British counter-terrorism officials term “a marauding terrorist firearms attack”, following a pattern first seen in the Mumbai attacks of 2008.

The Istanbul targets were international air travellers and ground staff at an iconic location, the third busiest airport in Europe.

IS is targeting Turkey because it sees its government as being un-Islamic and too close to its Western allies in Nato. IS is also feeling the pressure as the Turkish authorities move to close down its networks inside Turkey.

Turkey’s other main foe, Kurdish separatists, have carried out many attacks over the years but their primary targets have tended to be Turkish policemen and soldiers.

Paul Roos, who was due to fly home to South Africa, told Reuters he saw one of the attackers.

“He was wearing all black. His face was not masked. We ducked behind a counter but I stood up and watched him. Two explosions went off shortly after one another. By that time he had stopped shooting.

“He turned around and started coming towards us. He was holding his gun inside his jacket. He looked around anxiously to see if anyone was going to stop him and then went down the escalator. We heard some more gunfire and then another explosion, and then it was over.”

Pope Francis denounced the “brutal terrorist attack”, saying: “May the Lord convert the hearts of the violent ones and support our efforts toward the path of peace.”