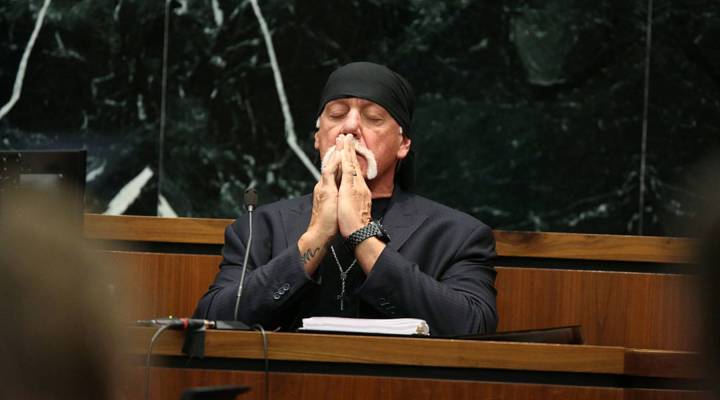 Terry Bollea, aka Hulk Hogan, testifies in court during his trial against Gawker Media at the Pinellas County Courthouse on March 8, 2016 in St Petersburg, Florida. John Pendygraft-Pool/Getty Images

Terry Bollea, aka Hulk Hogan, testifies in court during his trial against Gawker Media at the Pinellas County Courthouse on March 8, 2016 in St Petersburg, Florida. John Pendygraft-Pool/Getty Images

The TV star and former wrestler was awarded $115 million in damages over a sex tape posted by the site in 2012. Gawker founder Nick Denton said in a statement that the company would appeal. The New York Times notes that Gawker, which now employs about 250 people accross seven different sites, had built up its finances to prepare for the trial. The jury found Gawker, Denton and then-editor AJ Daulerio liable.

Gawker had argued that the sex tape was newsworthy, and publishing it was within its First Amendment rights since Hogan is a public figure.

But, “Hogan’s lawyer Kenneth Turkel said during the trial that Gawker typified the often anything-goes world of internet publishing,” The BBC reported. “The verdict could lead to more caution among Internet news websites, which frequently have less editorial oversight than traditional media outlets.