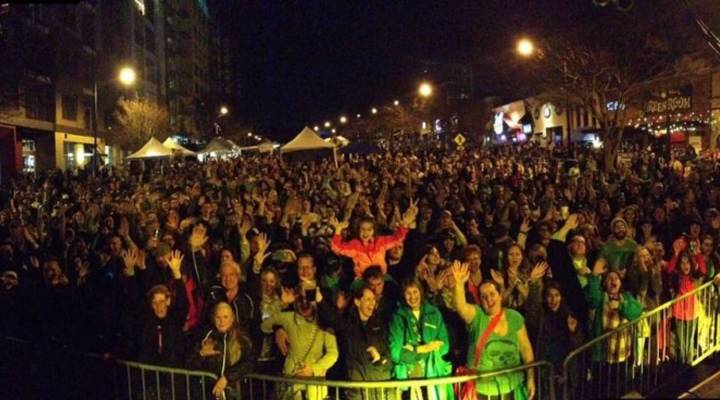 For some, St. Patrick’s Day is an excuse to drink green beer and pick four-leaf clovers. But for the country of Ireland, it’s a chance to conduct some global PR. And if some Irish festivals feel like travel ads for the Green Isle, that’s because they kind of are.

Drummers and dancers performed under tents to stay out of the rain at the inaugural St. Patrick’s Day festival in Nashville last year. That event did get a little help from the Irish government, but nothing compared to this year: The country’s tourism and cultural agencies are footing a third of the bill, according to organizers.

Nashville’s festival, which showcases Irish music, is one of several around the U.S. that the Irish government supports financially. Anne Anderson, the country’s ambassador to the U.S., said it’s because culture is Ireland’s “calling card to the world.”

“To present ourselves to the people of Tennessee through our music makes sense to us in very many ways,” Anderson said.

The country has turned St. Patrick’s Day into a worldwide branding campaign. The number of iconic sites around the world that are lit in green for the evening grows each year. Nashville’s Bridgestone Arena and Reunion Tower in Dallas joined the 2016 list for the first time.

Anderson said her country is putting new emphasis on making connections in the American South, and with Tennessee in particular. She pointed out that an estimated 14 percent of Tennesseans are of Scotch-Irish decent.

The goal of the Nashville festival is to plant the seed that Ireland might be a nice place to visit or consider doing business, she said.

“They always tell me,” Willis said, “’the whole reason we do this is bums in seats. We want bums in seats on airplanes going to Ireland.  If that’s not what we’re getting out of this, we’re going to pull our funding.'”

Willis says her Irish backers even track airline travel originating from cities where they’ve invested in St. Patrick’s Day celebrations to see if they’re getting a return on the investment.