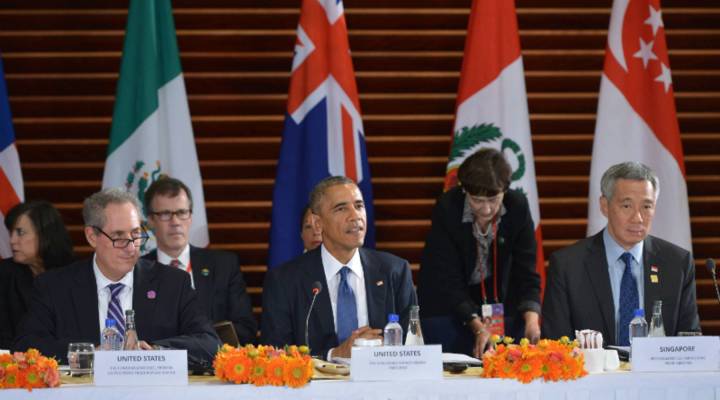 COPY
President Obama speaks during a meeting with leaders from the Trans-Pacific Partnership at the U.S. Embassy in Beijing on November 10, 2014.  MANDEL NGAN/AFP/Getty Images
Economic Anxiety Index®

President Obama speaks during a meeting with leaders from the Trans-Pacific Partnership at the U.S. Embassy in Beijing on November 10, 2014.  MANDEL NGAN/AFP/Getty Images
Listen Now

The topics of international trade and free trade agreements have been big issues in the presidential debates and with many voters.  Republican John Kasich, who won Ohio Tuesday night, is the only candidate left standing who supports a pending trade deal that would cover roughly a third of global trade. The Trans-Pacific Partnership has faced heavy criticism from Donald Trump and Bernie Sanders, in particular.

Sanders’ strong rebuff of trade has been credited with helping him upset Hillary Clinton in Michigan last week. Clinton and Ted Cruz have both said they don’t support the agreement either.

About a third of respondents believe free-trade agreements are good for the economy; 18 percent say they are bad.

That reflects a shift also visible in the presidential campaign, where Republican front-runner Donald Trump has led the charge against the Trans-Pacific Partnership and argued that past free-trade agreements have been bad deals for American workers.