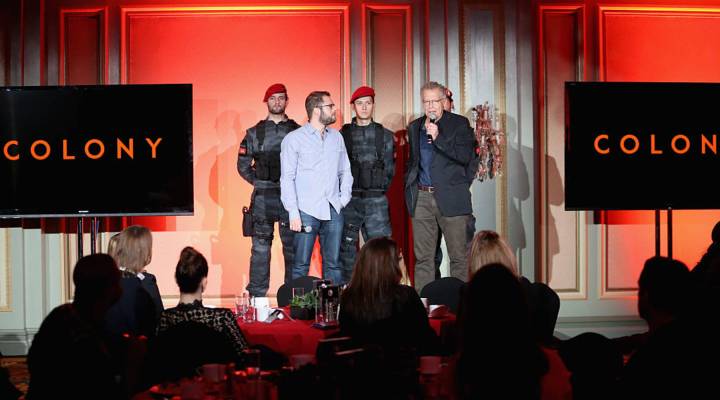 This is what you might call an eventful time to be in television and certainly at USA Network. The channel was mostly known for marathons of “NCIS” and “Law & Order,” or for scripted comedies like “Burn Notice” and “Psych.”

But last year, the network changed tact. They greenlit “Mr. Robot,” a suspenseful drama about a cyber-security engineer and hacker, which was quickly declared a hit.

So perhaps it was no surprise when USA followed up with “Colony” earlier this year. The series is set in the near dystopian future where Los Angeles has been invaded by aliens and follows one family as they navigate collaboration and resistance to survive. The season one finale airs tonight and it’s already been renewed for a second season.

Carlton Cuse and Ryan Condal are the co-creators of the series. Cuse has a long resume in television that includes “Lost” and “Nash Bridges.”

Carlton Cuse on how television has changed since the beginning of his career:
“I think the biggest change is, we’ve moved away from a lowest common denominator mentality. When I first started, there were four networks and there really wasn’t a lot of cable production and the goal of networks were to put on shows that reach the broadest possible audience. Now, I think we live in an environment where there are 410 scripted television shows between network, cable, and streaming services. The most important thing is level of engagement. You don’t need to be everyone’s favorite show, but you need to be somebody’s favorite show.

Ryan Condal on why he’s looking at more than ratings:
“I’m very impressed that we’ve been able to do this. I mean, the show is not based on anything, it’s a completely original idea created entirely for television…to be able to get an audience, without having a Marvel comic book or a remake of a 90s TV show or an extension of a movie in this climate is I think really impressive.”