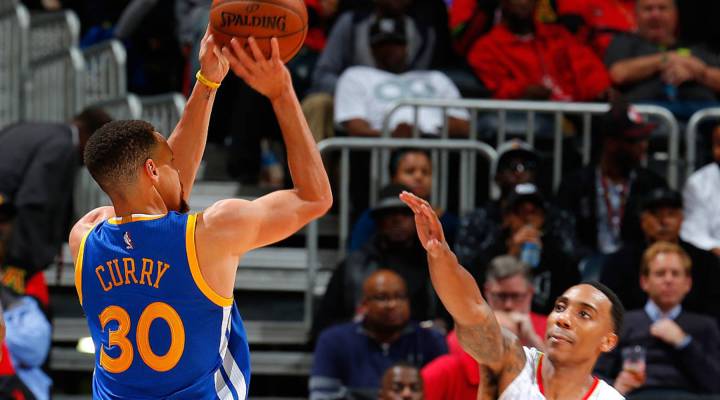 Stephen Curry #30 of the Golden State Warriors shoots a three-point basket against Jeff Teague #0 of the Atlanta Hawks at Philips Arena on February 22, 2016 in Atlanta, Georgia. Kevin C. Cox/Getty Images

Stephen Curry #30 of the Golden State Warriors shoots a three-point basket against Jeff Teague #0 of the Atlanta Hawks at Philips Arena on February 22, 2016 in Atlanta, Georgia. Kevin C. Cox/Getty Images

Sometimes, even as a tech reporter who dabbles in economics and finance,  I get invited to things that seem a little out of left field.

That’s how I felt about the request to join Brita (yep, the water filter people) and it’s new spokes-athlete Steph Curry, the reigning NBA MVP and star of the champion Golden State Warriors. Cool– but not exactly on my beat. Then again, it was around the corner at a public school in Oakland, so I went.

And, as it turns out, Curry has been making some forays into tech and media lately. He co-founded a social media platform called Slyce (still in beta) aimed at connecting athletes and fans. The Brita campaign includes a user-generated ad contest, where the person behind the winning commercial–about the benefits of drinking water–gets to star in the TV ad with Curry.

But the Curry-Brita team up is mostly about influencing kids to make healthy choices and drink water, and to be honest, that was kind of great.  He even let school kids douse him with water (take that, Gatorade).

When I sat down with Curry, we spent a few minutes on water–the crisis in Flint, Michigan; digging wells in Africa. We also talked about the economics of his specialty: the 3-point shot. He was fresh from setting an NBA record the night before, for the most  3-pointers in a single season. That would be 300.

All that, and yes, there’s some tech in this show: AlphaGo and our impending doom!

Follow Dispatch more closely by creating a Soundcloud playlist  right here. You can also add our feed to your podcast player.  In Podcasts on iOS, click the plus sign and paste in this link: — it’s a similar process for almost every other podcatcher app.