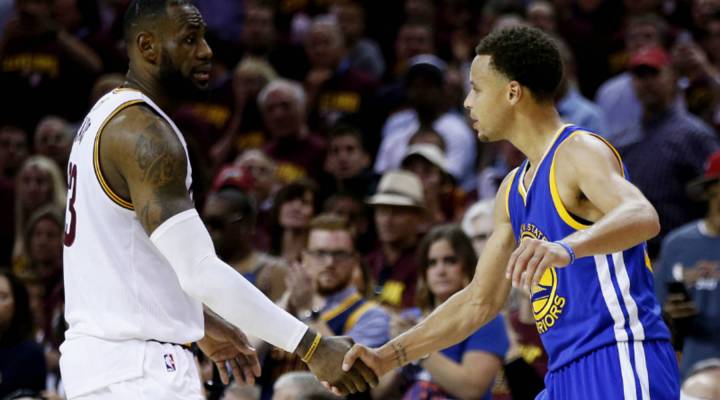 COPY
LeBron James of the Cleveland Cavaliers shakes hands with Stephen Curry of the Golden State Warriors after the Warriors defeat the Cavs to win Game 6 of the 2015 NBA Finals at Quicken Loans Arena last year. Ezra Shaw/Getty Images

LeBron James of the Cleveland Cavaliers shakes hands with Stephen Curry of the Golden State Warriors after the Warriors defeat the Cavs to win Game 6 of the 2015 NBA Finals at Quicken Loans Arena last year. Ezra Shaw/Getty Images
Listen Now

Last year’s victory by the Warriors over the Cavaliers was also a victory for ABC.

The network raked in more than $158 million in ad revenue during the final series, according to iSpot.tv, which tracks television ad spending. It estimates the 2015 NBA Finals delivered more than six billion live ad impressions.

A lot of those commercials were purchased long before anyone knew we’d have the drama of a Steph Curry-LeBron James matchup to tune in for.

“For these big marquee events, because there’s so much demand for them, the rates are generally set ahead of time,” said Sean Muller, CEO of iSpot.tv. He said many marketers made ad commitments months and months before the playoffs.

But ratings still matter, and matter a lot, to the network’s bottom line.

“The better the Nielsen ratings are this year, the more leverage they have next year when it comes time to sell a new set of ads for next year’s NBA Finals,” said Victor Matheson, an economics professor at the College of the Holy Cross.

That’s got ABC cheering for another close series this year.

And for a long series. Because more games equal more millions in ad revenue.