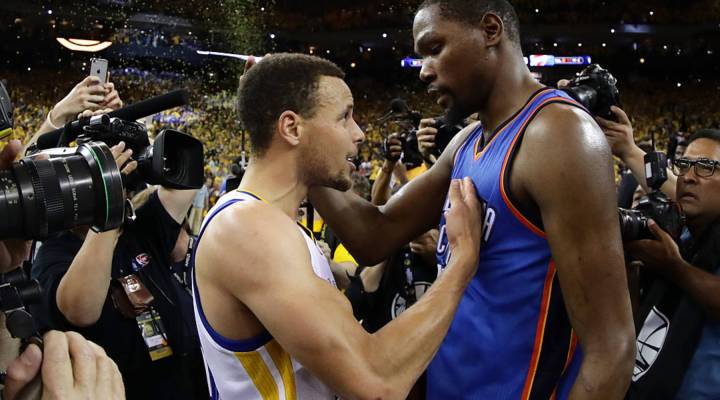 COPY
Stephen Curry of the Golden State Warriors speaks with Kevin Durant after the Warriors beat the Oklahoma City Thunder 96-88 win in Game Seven of the Western Conference Finals on May 30, 2016 in Oakland, California. Ezra Shaw/Getty Images
Final Note

Stephen Curry of the Golden State Warriors speaks with Kevin Durant after the Warriors beat the Oklahoma City Thunder 96-88 win in Game Seven of the Western Conference Finals on May 30, 2016 in Oakland, California. Ezra Shaw/Getty Images
Listen Now

There was a pretty big Leave or Remain vote right here in the U.S. today, concerning basketball superstar Kevin Durant.

He voted to leave the Oklahoma City Thunder for the Golden State Warriors, joining their all-star lineup and two-time league MVP Steph Curry creating what many are calling a “super team.”

The NBA had been trying to prevent super teams — new rules in 2011 tried to make the game more equitable for smaller market teams — but the NBA just raised the league’s salary cap $24 million per player. That’s because of a huge TV deal, and this year’s Finals Game 7 was the highest-rated NBA game since 1998.

The league isn’t likely to get that worked up over the equality issue. And yes, I’m picking up on the meta overtones here.