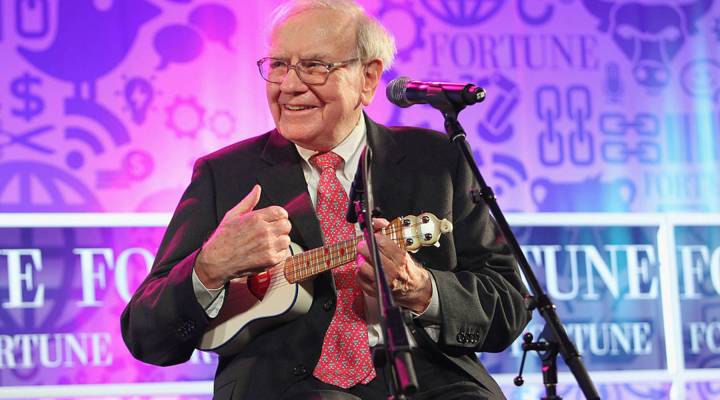 COPY
Warren Buffett performs onstage at FORTUNE Most Powerful Women Summit on October 15, 2013 in Washington, DC. His letter to investors released over the weekend had a positive outlook on the American economy.  Paul Morigi/Getty Images for FORTUNE

Warren Buffett performs onstage at FORTUNE Most Powerful Women Summit on October 15, 2013 in Washington, DC. His letter to investors released over the weekend had a positive outlook on the American economy.  Paul Morigi/Getty Images for FORTUNE
Listen Now

If you listen only to presidential candidates on the campaign trail, you might have a sense of doom and gloom about the American economy. Republican Donald Trump has said flat out,“this country is dying.” Others have followed with less dire, but still pessimistic, readings on our future.

But not so said billionaire CEO Warren Buffett. In his annual letter to Berkshire Hathaway investors this weekend, Buffett was downright optimistic about the U.S. economy.

“For 240 years it’s been a terrible mistake to bet against America, and now is no time to start,” Buffett wrote. “America’s golden goose of commerce and innovation will continue to lay more and larger eggs. America’s Social Security promises will be honored and perhaps made more generous. And, yes, America’s kids will live far better than their parents did.”

You could read the data as glass half empty or, like Buffett, glass half full.

“I sit here and say, you know what, everybody’s whining, this isn’t so bad,” he said. “It’s really not and I believe that. But on the other hand, this whole struggle … No one feels safe and comfortable. That’s a little bit harder, for an economist, to put our hands on.”

Josh Bivens, with the Economic Policy Institute, said he’s glad politicians are talking about the problems in our economy. He believes the economy still hasn’t fully recovered from the Great Recession and pointed out that, even before the recession, hourly wage growth was stagnant.

“Now, if you ask me, will my son be better off than me 30 years from now, the economy is going to be a lot richer,” he said, “but yet we do such a bad job equitably delivering the fruits of that growth that I’m not sure he’ll be better off,” he said. “If he ends up in the bottom quarter of the income distribution, he may well not be.”

Bivens said the U.S. is a rich nation with lots of potential; it’s good for Buffett to remind us of that, but the key is to generate growth where everyone benefits.