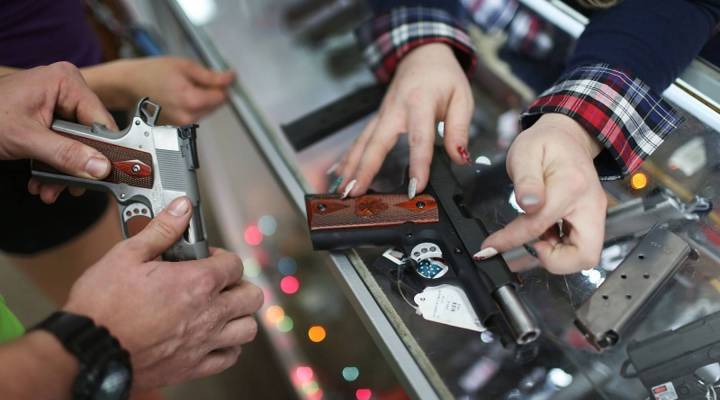 COPY
Gun sales are up nationwide; a third of U.S. households owns some kind of firearm. Photo by Joe Raedle/Getty Images

Gun sales are up nationwide; a third of U.S. households owns some kind of firearm. Photo by Joe Raedle/Getty Images
Listen Now

Crime may be down nationwide, but gun sales are on the rise.

There was a record high number of gun sales in December — and now a third of American households owns some kind of firearm.

Barrett said he saw some interesting things, including an appearance by the Bureau of Alcohol, Tobacco, Firearms and Explosives, or ATF.

“One or the other them was not actually the buyer, and there was something funny going,” Barrett said. “These people turned out, had felony records. Fortunately, the store didn’t sell the guns.”

Meaning the shop should have denied the couple even before a background check was done.

Despite that run-in, the shop has done its best to follow the rules when selling guns, according to Barrett.

The rise in sales could also be a result of tougher gun laws around the country and fear of these stricter laws. For better or for worse, the shop owner has definitely made the most of that fear, Barrett said.

“The fact is that people come in because they are afraid,” Barrett said. “He wishes that he wasn’t doing fear marketing, but then he has to concede when I show him his own advertising. And he says, ‘Look I’m just a capitalist. Business is business.'”