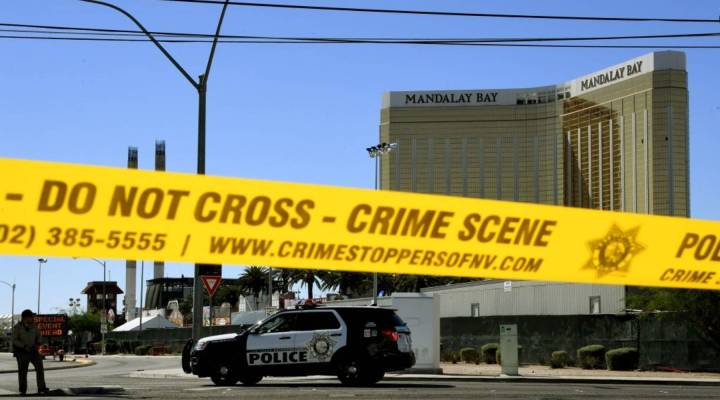 COPY
Crime scene tape surrounds the Mandalay Bay hotel after a gunman killed at least 58 people and wounded more than 500 when he opened fire on a country music concert in Las Vegas on Sunday. MARK RALSTON/AFP/Getty Images

Crime scene tape surrounds the Mandalay Bay hotel after a gunman killed at least 58 people and wounded more than 500 when he opened fire on a country music concert in Las Vegas on Sunday. MARK RALSTON/AFP/Getty Images
Listen Now

In wake of the mass shooting in Las Vegas, California Sen. Dianne Feinstein has introduced a bill to outlaw the sale of “bump stocks.” Those are the devices that attach to rifles to mimic automatic weapon fire and that were used by gunman Stephen Paddock during Sunday’s attack.

Some top congressional Republicans, who are typically against gun sale restrictions, said they’d be open to considering legislation.

The main manufacturer of bump stocks is a company called Slide Fire, based in Moran, Texas. It started selling them back in 2010 after getting approval from the Bureau of Alcohol, Tobacco, Firearms and Explosives. They were originally developed to help people with disabilities shoot and go for $99 to $199.

Thirty-year-old Glenn Bush, who lives in Dallas, said he bought one after getting a semi-automatic rifle as a Christmas gift. His cousin had one and convinced him it was a lot of fun.

“We have a bunch of land, so I thought it would be fun to play with,” he said. “I actually used it twice and then thought it was the most impractical, ridiculous thing ever, so I never used it again.”

“There wasn’t a particularly large inventory stock of these to begin with,” said Rommel Dionisio, a gun industry analyst at Aegis Capital. “It just didn’t sell well.”

But with lawmakers calling to get rid of bump stocks, some small online retailers are now selling out. On Slide Fire’s site, the company says it’s putting a hold on taking new orders “to provide the best service with those already placed.”

Meanwhile, some of the nation’s largest gun sellers appear to have pulled them off their sites. A Walmart spokesperson said bump stocks violate the company’s prohibited items policy and should’ve never been sold there in the first place.