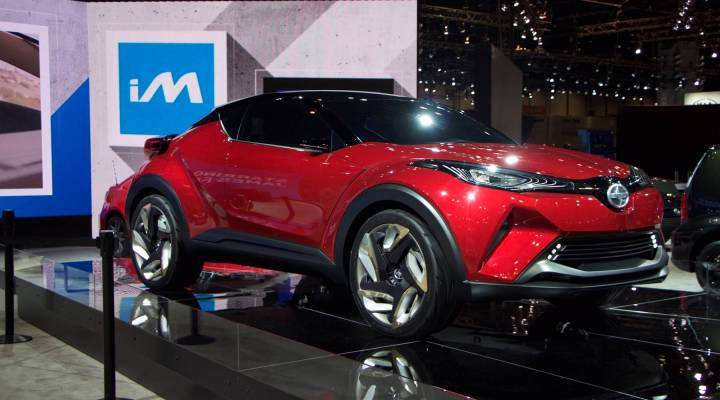 COPY
Toyota's last Scion model is this concept car, which will be folded into the Toyota brand. Nova Safo/Marketplace

Toyota's last Scion model is this concept car, which will be folded into the Toyota brand. Nova Safo/Marketplace
Listen Now

The Chicago Auto Show got underway this week, just as the industry was absorbing news from Toyota that its Scion brand was going the way of the Honda Element and the Nissan Cube — disappearing into the history books.

When the Scion debuted 2003 with its quirky, boxy look, it was designed to be the anti-establishment brand for a rebelling Generation X.

“Initially, when Scion was launched, it was more about the lifestyle, and more about how people were viewing the brand,” said Andrew Gilleland, vice president of Scion.

But Generation X grew up and the generation behind it — alternatively known as Generation Y or millennials — have not been as receptive to Scion’s brand message. Sales of the minibrand dropped during the Great Recession and have not recovered.

“What we’re seeing is with the millennials … they’re just far more pragmatic about their decisions that they’re making,” Gilleland said. “They listen to … their parents, which was something that … 12 year ago wasn’t occurring.”

In announcing that it is shutting down Scion, Toyota said the brand experiment had been a successful one in that it taught the car giant how to market to younger buyers.

In fact, those buyers are far more pragmatic, as well as quality-conscious. Toyota sold about twice as many Corollas last year than its Scions. And buyers in their early 30s, who are starting families, are gravitating to many of the same cars they grew up in — especially SUVs.

Kevin Krauss, a professional driver for Toyota who was giving rides in the RAV4 at the Chicago Auto Show, said that people in their 20s and 30s were most interested in the small SUV’s practical features.

Kyle Coley, 28, and Crystal Bravo, 26, were interested in hybrid and electric cars.

“I don’t really care about the flashiness of the car. I just want it to be something that’s gonna be reliable, that’s gonna last me for a long time,” said Bravo, who drives a used Honda Civic.

Ivan Martirosov, 27, of Des Moines, Iowa, is sitting in a BMW electric SUV. Martirosov says he is attracted to cars that can show an apparent quality of workmanship, rather than lower-priced cars.

She’ll drive it until it’s dead, she said. Coley drives a used Nissan Sentra. And while he has considered a Scion, he has ultimately not been impressed.

“I feel like they’re a cheap version of Toyota,” Coley said. “I would go with a Toyota over a Scion … I think the quality of Toyota is much better.”

Scions were originally designed to be cheaper, pared-down, customizable cars that look very different than the traditional family sedan. Some models of the car sell in the $16,000 range. In the early 2000s, they resonated well with young car enthusiast who spent additional money to customize their vehicles.

But today, more millennial buyers want a car with apparent quality. Some with higher incomes are even gravitating to luxury brands that might have been associated with baby boomers.

From left to right, Nick Recknagel, 24, of Burlington, Wisconsin, Jon Achs, 27, of Gurnee, Illinois, and a Mini Cooper representative. Rechnagel drives a used Jeep, and says he is underemployed and with too much college debt to buy a new car. Achs says he does not feel economically secure enough for a new car purchase.

“It’s a lot of new money, we call it,” said Michael Urbano at the Chicago Auto Show, who at 20 was a salesman for a Chicago-area BMW dealer. Urbano said about 40 percent of his clients are millennials, and they most desire “technology. They want their phones to work. They want everything to be hands-free, Bluetooth, USB.”

The car industry is listening to all of this, because millennials are now a formidable force. Michelle Krebs, a senior analyst at AutoTrader, said they’re one-third of the U.S. car market and in a few years, they’ll overtake baby boomers.

“They absolutely will be changing the way we buy cars, the kinds of vehicles that are out there. They will be a force to be reckoned with for the auto industry,” Krebs said.

Meanwhile, Scion is still selling its cars. It had an exhibit at the auto show with salespeople putting the best face on the news of their brand’s demise. They reminded onlookers that three of Scion’s brands will be rebadged as Toyota vehicles. A fourth Scion brand — a concept vehicle — is somewhere in between a crossover, an SUV and sports car.

The car, yet to be finalized and priced, is Scion’s last attempt to draw millennials.