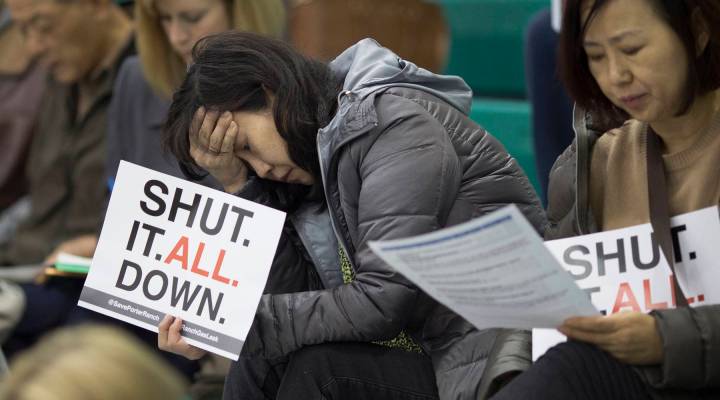 COPY
A woman holds a sign while attending a public hearing before the South Coast Air Quality Management District regarding a proposed order to stop a nearby massive natural gas leak, on January 16, 2016 in Granada Hills, near Porter Ranch, California. David McNew/Getty Images

A woman holds a sign while attending a public hearing before the South Coast Air Quality Management District regarding a proposed order to stop a nearby massive natural gas leak, on January 16, 2016 in Granada Hills, near Porter Ranch, California. David McNew/Getty Images
Listen Now

About 30 miles north of Los Angeles, people living in the town of Porter Ranch, and in some of its neighboring communities, said they first smelled the gas on October 23rd.

“Some people refer to it like a skunk” says Tammy Feola. She lives and works in Porter Ranch and describes the smell as “a stinky-makes-you-have-an-instant-headache-wanna-puke-smell.”

That smell came from a leak in a natural gas storage well in the mountains just behind the town. Since October of 2015, the utility, Southern California Gas has tried unsuccessfully to close the leak. In the meantime, thousands of Porter Ranch households have been relocated by the gas company.

Feola has wanted to relocate. She works as a hairdresser at Le Salon Complet in Porter Ranch and knows she’s still going to have to spend long days there, breathing the air.

“How much difference is it going to be if I sleep someplace else?” she asks.

One resident who is ready to move is Carl Newton. He says he’s felt the effects of the gas and has lined up at SoCalGas Community Resource Center — newly opened in a Porter Ranch strip mall to handle individual complaints and requests for relocation.

Mike Mizrahi is a spokesperson with Southern California Gas. He says they hope to have the leak contained by the end of February, or sooner.