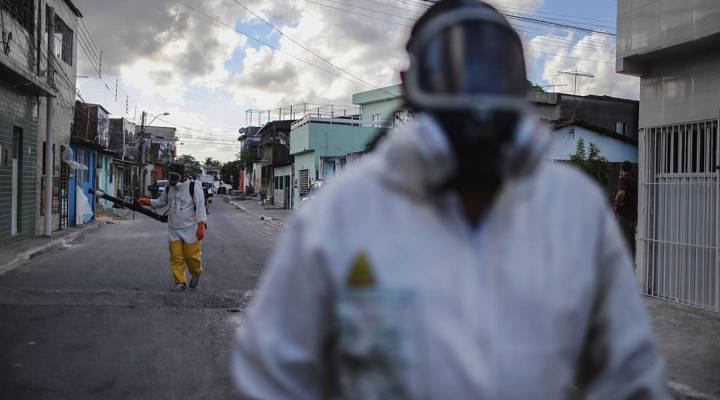 COPY
Health workers fumigate in an attempt to eradicate the mosquito which transmits the Zika virus on January 28, 2016 in Recife, Pernambuco state, Brazil. Two two-man teams were fumigating in the city today. Health officials believe as many as 100,000 people have been exposed to the Zika virus in Recife, although most never develop symptoms. Mario Tama/Getty Images

Health workers fumigate in an attempt to eradicate the mosquito which transmits the Zika virus on January 28, 2016 in Recife, Pernambuco state, Brazil. Two two-man teams were fumigating in the city today. Health officials believe as many as 100,000 people have been exposed to the Zika virus in Recife, although most never develop symptoms. Mario Tama/Getty Images
Listen Now

The Zika virus is spreading fast, and international health organizations are on alert. The mosquito-borne disease is of particular risk to pregnant women and their unborn children, prompting some countries warn women to avoid pregnancy. As countries like Brazil scramble to stop the virus, businesses are preparing for the impact of yet another fast-moving and so-far incurable disease.

Major airlines are already offering to change or refund tickets for pregnant women, but they may need to do more than that, according to Laurie Garrett, an infectious disease expert at the Council on Foreign Relations.

“The heartiest mosquito in the planet cannot fly across the ocean,” she said. “They hitchhike inside the hulls of ships, sometimes airplanes,” eventually entering a new country when cargo and passengers are unloaded. But Garrett said the vast range of the disease means its unlikely to result in the kinds of trade limits we saw with the Ebola outbreak.

“Nobody in the world could survive much in a globalized economy much if they tried to cut off everything from southern Canada to Terra del Fuego as trade partners,” she pointed out.

Trade may be safe for now, but travel agencies are watching closely.

Carlos Edery, senior vice president at Forest Travel and Affiliates,  which organizes business travel, destination weddings and meetings in Latin America, said his sister had to cancel business travel to Columbia because she is pregnant. He hasn’t tabulated numbers for this new outbreak but he did say: “I’ll tell you that any woman that is pregnant that was supposed to travel to Latin America within the few months is cancelling.”

But Edery said he hasn’t had any major events cancelled as a result of the outbreak, or seen much impact with business travelers. That matches up with what Vicky Fernadez de Larrea is seeing in Brazil, where she was visiting for work. She is senior vice president for Latin America at Carlson Wagonlit Travel, which works with several multinational clients.

“Over time,” she said, “these kinds of alerts have maybe less impact in what customers think about it or how they react when they hear it.”

De Larrea said frequent business travelers are accustomed to health and travel warnings and generally know how to adapt.